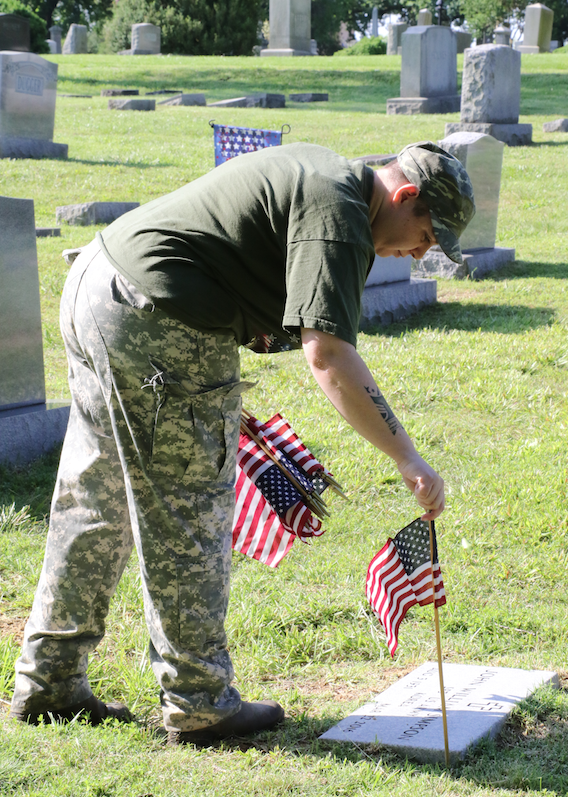 TITUS MOHLER | HERALD Lynn Vipperman participates in the flag placement at Westview Cemetery on Saturday in connection with Memorial Day. See more photos on A2 and online at www.FarmvilleHerald.com.

Honor and recognition was given in Farmville to fallen active-duty veterans of the U.S. armed forces through a couple of different events during the long Memorial Day weekend.

On Saturday morning, Veterans of Foreign Wars (VFW) Post 7059 led a group of people in planting flags on the graves of veterans buried at Westview Cemetery and Odd Fellows Cemetery.

A ceremony was also held on Memorial Day, Monday, in Varner Hall at Brookview Lodge.

Speaking Saturday morning, VFW Post 7059 Commander Fred Hill was pleased with the number of people who came out to place flags.

“This was a great turnout,” he said. “We had probably 20 volunteers.”

His wife, Chere Hill, noted that at least three VFW Auxiliary members were on hand, as well.

Fred Hill is a Vietnam-era veteran whose experience in a combat zone came in Grenada and Beirut. He said VFW Post 7059 has been placing flags at veterans’ graves for at least 20 years. He began participating in it about five years ago and has continued consistently ever since then.

“I do it because I came back,” he said. “They didn’t, so I owe them that, you know? But that’s the function of the VFW is to preserve the history of the military as well as pay the due respects. And people forget, Memorial Day is for those that didn’t come back.”

His wife, who was participating for the first time, noted Memorial Day used to be called Decoration Day, “and everyone went to the cemetery to plant flowers, decorate, put flags out for their loved ones who’d fallen in the wars.”

Fred Hill said that Farmville is a relatively small town, but “we put out an awful lot of flags. And I’m just so happy we’ve got so many volunteers.”

In the course of explaining what it meant to her to be able to place the flags, Chere Hill fought back tears. After a pause, she said she was doing it “to honor all these guys, and knowing that we’ve got more coming. They’re not going to be alone. We lose one about every day somewhere, because of their age. The World War II guys are going fast, and then with all the soldiers over in the mideast right now.”

Her husband mentioned that one of the volunteers brought his wife and their three children.

“It’s good for kids to see what’s going on,” she said.

The ground of both cemeteries was damp due to rain from the night before. The group, which started at Westview before moving on to Odd Fellows, included Frank Medlin, a Vietnam veteran who served in the U.S. Army.

“This is the first time I’ve done this, but I assure you that next year, I’ll be right back out here, wet feet and all,” Medlin said. “It’s an honor to come out here and pay our respects to these fallen vets and give them the honor that they so richly deserve.”

The Memorial Day program at Brookview Lodge on Monday had about 50 people in attendance. VFW Post 7059 was heavily involved in that event as well as posting and retiring colors, leading the pledge of allegiance and reading John McCrae’s war poem written in 1915, “In Flanders Fields.”

Pastor Earl Wallace opened and closed in prayer, and he also gave his reflections and thoughts on the day.

After the program, Wallace said it was an honor to contribute to it.

“It’s an honor to remember our fallen,” he said.

Having been on active duty in the U.S. Navy from 1966-1970, Wallace said that on Memorial Day, he recalls a friend of his who he planned to meet in a storeroom at 4 p.m. one day when both of them were serving on board an aircraft carrier. There was an explosion in that storeroom at exactly 4 p.m.

“My friend and four others died in that explosion,” he said. “It should have been six, because I was supposed to be there, planned to be there. But because of orders to type requisitions, I was held over in the supply office, and I’ve been living life on a postscript now for 50 years almost.”

Wallace made note of the people, some of them family of fallen veterans, who attended the program.

“I do notice the crowd gets smaller each year as these men and women go on,” he said.

It underscores the importance of the words he quoted in Lincoln’s speech, making clear that the bravery of fallen veterans on the battlefield can never be forgotten.

Lincoln said, “It is rather for us to be here dedicated to the great task remaining before us — that from these honored dead we take increased devotion to that cause for which they gave the last full measure of devotion — that we here highly resolve that these dead shall not have died in vain — that this nation, under God, shall have a new birth of freedom — and that government of the people, by the people, for the people, shall not perish from the earth.”