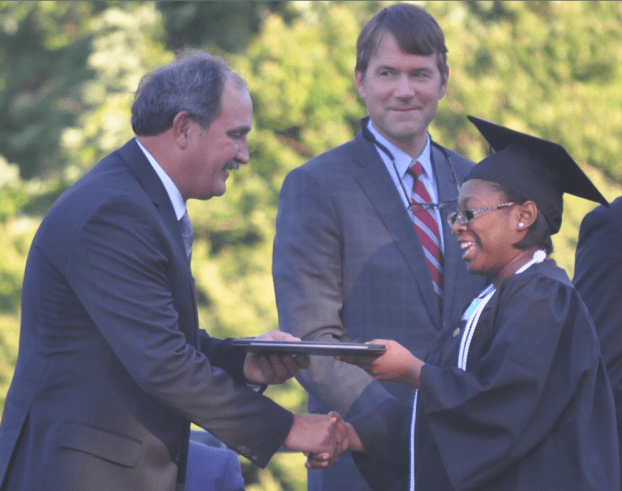 ‘Opportunity to be a bridge’

The 39 Fuqua School seniors who turned their tassels Friday, becoming the latest graduates of the school, began “an adventure that will last a lifetime,” said Alex Huggard, head of the Upper School, who welcomed families and friends of those graduating to the campus for the school’s commencement ceremony.

Along with Huggard, the graduates were encouraged by Fuqua alum and state Sen. Monty Mason, who attended then-Prince Edward Academy, graduating in 1985.

“Our identity is diversity,” valedictorian Brad-Edward Davis said of he and his classmates. “We’ve got so many different things going on between the members of this class, which, in my mind, makes is one of the greatest classes to ever come from Fuqua. If our theme is ‘Boundless individual potential,’ look at us. We’ll have farmers and doctors, athletes and coaches, trainers, politicians, soldiers, lawyers and much more. We’re all so different, but we’re all very similar — we’re Fuqua Falcons.”

Reciting the words of the Class of 2003’s valedictorian Robert Cole, Davis told his classmates, “‘Contrary to whatever myths may exist, the valedictorian is not somehow imbued with mystical powers that enable him to reach into the core of human existence and pull out the answers to the mysteries of life.’”

“No, I don’t have the answers to life — that’s the Bible in my belief. However, I will leave you with one thing that I’ve learned through my years here … All human beings are similar, and each person is unique. It’s a pretty simply concept. We all have our own backgrounds that define who we are and what we do, but the thing that can bring this nation to an end is the simplification of that thought process. We believe that Republicans are Republicans and Democrats are Democrats. We think that if you share ideals with one side you’ve got to stay over on that side, only believe with them. And this couldn’t be further from the truth.”

“I’ve learned that we must lose and win with equal grace,” said Sarah-Jane French, salutatorian of the Class of 2017. “If you define failure as an opportunity to learn, then I have learned that being the salutatorian means my view is the same as Brad’s, my seat is just as comfortable and I get to speak first, meaning I don’t have to feel nauseated by nervousness waiting for my turn to speak. We are all winners tonight, no matter what seat we’re sitting in, for we all have achieved greatness to be sitting here.”

Robert Burns, the class giftorian and a third-generation graduate of Fuqua, announced the class’ gift of two butterfly benches in honoring the school’s faculty, which will be placed at the entrance to Gilmer Gymnasium.

One bench honors the Class of 2017 and its class sponsor, Connie Hicks, while the second honors faculty and staff who are departing this year with the class, including Tammy Benhoff, Sandy Bolick, Vicky Dotson, Carroll Gillespie, Frances Moore, Lora Smith, Karen Snead, Martha Womack and Terri Wyatt. “It is our honor to recognize you as members of the Class of 2017,” Burns said.

In his address to the graduates, Mason, the son of Bob and Daphne Mason, discussed change, civility and taking on challenges.

Prefacing that it was an “ideal time” for a politician to deliver a graduation speech, he said energy, enthusiasm and involvement were at an “all-time high” in the political environment.

“But, harnessing that energy for positive change is essential. Think about the town halls that have been held recently. What is the first thing you think of when I mentioned them? How many of you thought about the boisterous and, in some cases rude disruptive crowd? That means that the policy positions they espouse was not top of mind. In some ways, that defeats the point. The foundation of this country is the First Amendment that guarantees my right to stand here and offend as many of you as I like, right? But to what end? What does that do to the message? Shouting louder than someone on the other side doesn’t win the point — in fact it likely weakens it as the lack of decorum becomes the story.”

Citing the business model of Colonial Williamsburg has been under pressure for years, Mason said that Prince Edward Academy and Fuqua “was founded on principles that have not stood the test of time. Not the educational foundation and academic rigor always found here, but we now know that separate is decidedly not equal — that segregated societies are unacceptable in our country and should be to mankind. This school had to change and that continues today. While you and I had nothing to do with origins, we have the opportunity to be a bridge from the past to the future.”

“We need you to take the values that you have been taught here,” Mason told the seniors, “combined with the idealism that you know can be and meld it with your future experiences to push yourself into new roles and new opportunities.”

CHARLOTTESVILLE — A 38-year-old Marine Corps veteran of Iraq and Afghanistan has announced his candidacy for the Fifth District Congressional... read more