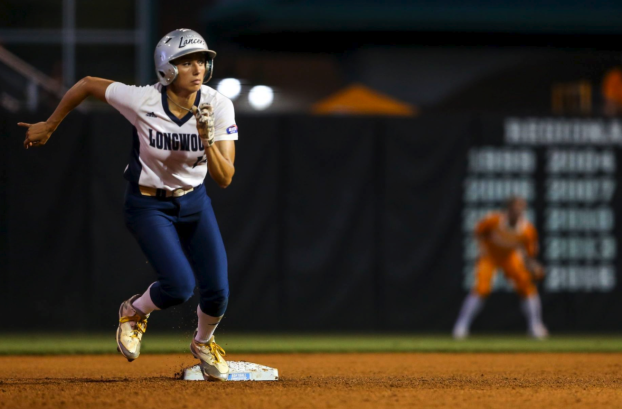 AUSTIN PERRYMAN | UNIVERSITY OF TENNESSEE Longwood University sophomore center field Jordan Clark looks for an opportunity to advance on the bases during the Lancers’ opening game of the 2017 NCAA Division I Softball Tournament on Friday in Knoxville, Tennessee.

No. 8 Tennessee shuts out Lancers in NCAA tourney

Longwood University’s softball team fell behind early and was held to one hit by host and national No. 8 seed University of Tennessee on Friday as the Volunteers went on to win 5-0 during the first day of action in the 2017 NCAA Knoxville Regional.

“When you play a good team, that means you’ve got to play your very best game,” Lancers Head Coach Kathy Riley said. “And today, we didn’t play our very best game, and that’s what it would have taken for us to win tonight. There were just some critical things that we could have done better, and getting the leadoff hitter out would have been one of them, and then just maybe towards the end of the game, having some better at-bats, maybe being a little more aggressive early in the count.”

It was Longwood sophomore center fielder Jordan Clark that broke up Moss’ bid for a no-hitter with a single in the fourth inning.

Riley noted her players are used to seeing 58-60 mile-per-hour (MPH) pitches, and Friday, they were suddenly exposed to pitches coming at 67-68 MPH.

“Matty did a really nice job keeping the ball low,” Riley said. “She didn’t really miss many pitches this evening. She stayed at the knees all day, and she didn’t really come up to the mid-thigh or the waist very often, so I think that made it more difficult. And then I do think later in the game that she did mix in the change-up a little bit better. In that situation, I thought what we could have done differently was maybe not chase some of the low ones but wait till she made a mistake on a high change-up. But again, that’s always a difficult task when somebody’s throwing 67, 68, and then they turn around and throw a change-up. It makes it more difficult because you’re sitting on the speed first.”

Clark confirmed the challenge Moss posed at the plate, referencing the speed of her pitches and the change-up.

“It kind of throws us off a little bit,” she said. “We haven’t really seen speed like that. And then her change-up too, being able to pick it up — personally, I couldn’t really pick it up until about halfway.”

McCarthy said Tennessee (45-10) presents a tough lineup to throw to, emphasizing how it features different traits in bulk, like two players coming up with speed, then three lefties in a row.

Having faced the host and No. 1 seed of the Knoxville Regional, Longwood (28-28), the No. 4 seed, will take on No. 2 seed Ohio State University (35-17) on Saturday at 2:30 p.m. in an elimination game. The Buckeyes were upset 7-3 by No. 3 seed University of South Carolina Upstate in the first game of the regional Friday.

McCarthy noted how her team’s successful run in the Big South Softball Championship helped prepare it for playing important games with little time in between.

“We ended up losing the first championship game, and we had to make a quick turnaround for the next day,” she said. “It’s something that we’re used to, playing three-game series just like every other team. And Coach just talked about it at our end-of-the-game meeting — what happened today is what happened, and tomorrow is a new day.”