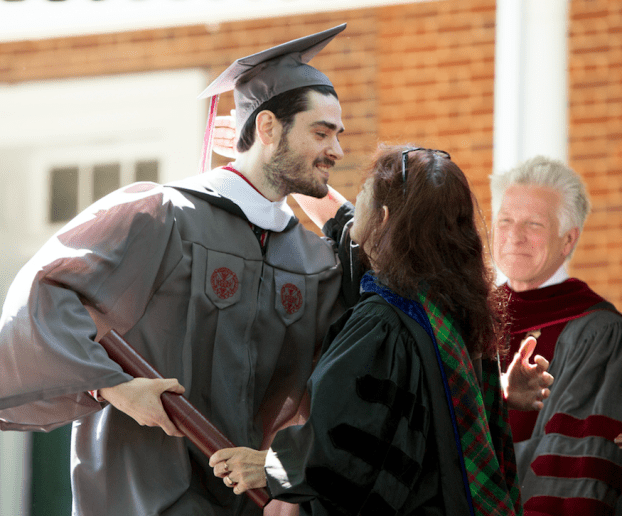 Stephens delivered the commencement address, which was entitled, “Leave Your Safe Spaces,” and it was published on The New York Times website Monday.

“Very soon, you will hold in your hands the diploma of a great and storied college,” Stephens said to students. “Very soon, you’ll be gone from this gorgeous campus; this nurturing, stimulating, protective environment — a place that, in a manner of speaking, has been your safe space for these past few years. So let me ask you: Are you ready — really ready — to leave this safe space?”

Addressing what “safe space” has come to mean in modern America, Stephens said the words denote “a place, usually on campus, where like-minded people — often sharing the same race, gender, sexual orientation or political outlook — can spend time together without having to encounter the expression of any ideas or opinions that they do not endorse.”

Essayist Judith Shulevitz chronicled in The New York Times a simple example of a “safe space” that Stephens conveyed, and then he used her words to help emphasize how the concept has expanded.

“As Shulevitz noted in her essay, ‘once you designate some spaces as safe, you imply that the rest are unsafe. It follows that they should be made safer,’” he said. “That’s an important insight. It shows how easily an impulse to shield and protect the vulnerable quickly becomes a desire — and then a demand — to impose a particular concept of ‘safety’ on others, whether they want it or not.”

Stephens explained how the process of thinking in regard to “safe spaces” has grown to consider the possibilities of controlling speech anywhere — and even thoughts — in the name of safety.

“I’m sorry to say that the process I’m describing — Orwellian though it seems to me, in that it turns supposed victims into moral bullies — is increasingly becoming a dominating fact of life on colleges and universities across America,” he said.

He explained that this notion of safety is shutting down opportunities for students to hear controversial and/or opposing points of view.

“In the name of being ‘safe,’ students with traditional religious values or conservative political views now feel decidedly unsafe about expressing their views on campus,” Stephens said. “And in the name of being safe, we are gravely jeopardizing the central task of any serious liberal education, which is not — or not merely — the transmission of knowledge.”

“It is, rather, the cultivation of a certain kind of spirit: a passion for inquiry; an insistence on asking hard questions and challenging received wisdom; a reveling in argument; a productive tension between self-confidence and self-doubt; a robust faith in the ultimate attainability of truth; and a humble acceptance that our understanding of the truth will almost always be something less than complete,” Stephens said.

He noted that this is how society educates young men and women toward the moral and political responsibilities of democratic self-rule and lay the conditions for scientific and social progress.

“This is how we lay sturdy foundations for a truly civil society,” Stephens said. “Thomas Jefferson said it best in his first inaugural address: ‘Error of opinion may be tolerated where reason is left free to combat it.’”

Recalling his description of a serious liberal education, Stephens said, “From everything I have read about Hampden-Sydney, this is the education you have received here. I hope you use it well. But I need to level with you: You’ll be facing an uphill battle.”

He told students that many of their peers across the country are also graduating but without the benefit of an education that was liberal in the truest sense of the word, leaving them inclined to extend the domain of their “safe spaces” into the next stages of their lives.

“Today, we live in a world that makes it easy to continue inhabiting these safe spaces, above all when it comes to politics, public policy and ideology,” he said. “On social media, you follow, share, ‘like’ and retweet the people you agree with — while you ignore, unfriend, remove or block those you don’t.”

Stephens explained that as a conservative writer who, for 16 years, had been writing for the staunchly conservative editorial page of The Wall Street Journal, he decided to join the mostly liberal editorial page of The New York Times because he “wanted to write for an audience that might not be wholly receptive — and might even be openly hostile — to what I have to say.”

A ribbon cutting ceremony was held for the recently-completed outdoor classroom at Prince Edward County High School on Tuesday. In... read more