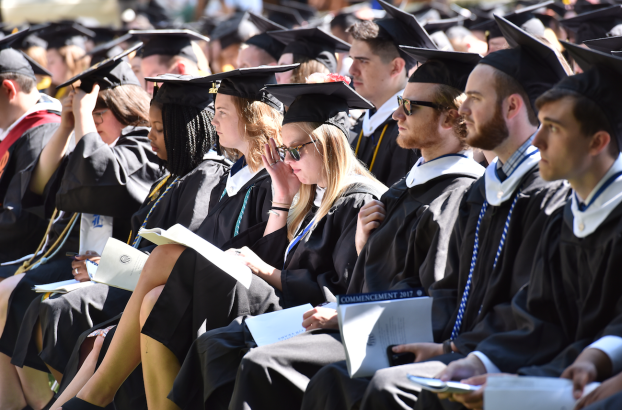 Longwood University graduates were charged with making positive shifts in history and being adaptable in a continually changing economic climate during its graduate and undergraduate commencements on Friday and Saturday.

According to the release, the numbers include graduates who completed their studies in August and December.

The commencement speaker for the Friday evening graduation was Dr. Gilbert Bland, an entrepreneur who is chairman of the GilJoy Group and a former chairman of the State Council of Higher Education for Virginia, according to the release.

During his address, Bland encouraged speakers to learn from failures and thrive under sometimes uncertain political and economics circumstances.

“You will face the increasing reach and uncertainty of globalization, life’s circumstances, politics, organizational and budgetary cutbacks or the extensions of the technological revolution,” Bland told the graduates. “Within these moments of uncertainty are where your true learning, fortitude, creativity and ability to compartmentalize and balance the various demands in your life will be displayed and will rank among your life’s greatest lessons and teachers.”

Bland, the release cited, was awarded an honorary doctor of public service.

“Barbara Johns walked out of that tarpaper shack in 1951 because she didn’t think history was too heavy to move,” Ayers said according to the release. “She moved it. The world is full of possibility, not merely more of what has always been.”

Ayers, according to the release, was the president of the University of Richmond from 2007-15 and was awarded an honorary doctor of humane letters.

In the graduate commencement ceremony Friday evening, Dr. Bennie Waller from the Class of 1990 and professor of finance and real estate, chair of the department of accounting, economics, finance, real estate and ISCS and director of the Center for Financial Responsibility, received the Faculty Research Award, according to the release.

During the undergraduate commencement, Amanda Nichole Chappell, a psychology major and health education minor from Zuni, received the Dan Daniel Senior Award for Scholarship and Citizenship, the release cited. Chappell has been accepted into Radford University’s master’s program in experimental psychology.

Professors in addition to students received awards. Dr. Sujan Henkanaththegedara, assistant professor of biology, received the Student-Faculty Recognition Award, which honors a faculty member for professional excellence and devoted service to students, according to the release.

Edward Ayers, one of the nation’s most accomplished historians and university presidents, and noted entrepreneur and commonwealth civic leader Gil... read more