EMILY HOLLINGSWORTH | HERALD Cumberland Planning Director and Zoning Administrator Sara Carter holds a map of possible commercial and residential development around the Cobbs Creek Reservoir site. The map was the plan that had the most favorable votes during the meeting.

Meeting explores land use at reservoir

A meeting discussing development of the land surrounding the Cobbs Creek Reservoir was held by the Cumberland County Planning Commission on Tuesday. 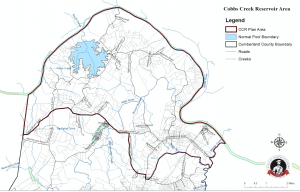 CUMBERLAND COUNTY
The Henrico County-owned Cobbs Creek Reservoir will be located in northern Cumberland County. The project, encompassing 15 miles of stream bed, should be complete in 2022, according to officials.

When a show of hands was suggested near the end of the meeting, the majority vote, which was between eight to 12 people, was in favor of the second map presented by Carter.

The conceptual map contains a section for a village district around the area of Cartersville Road and Cartersville Extension, where commercial properties could be developed up to 5,000 sq. ft. on one acre.

Carter equated the development to what would be smaller commercial properties, similar to convenience stores or fast food restaurants.

Residential and commercial properties were conceptualized on the map surrounding Punch Creek and Sawmill Road, south of the base of the Cobbs Creek Reservoir Plan Area.

The commercial properties in that section would be in a larger scale, with a density calculation of 10,000 sq. ft. per acre, equating commercial property sizes equivalent to a Food Lion, Carter said. She added regulation standards would increase with properties of such density.

Carter said residential properties could also be built in these areas, and the maximum number of dwellings under this plan would be 16,850.

However, Carter said it was often not possible to maximize all development potential in an area, even in areas that are already highly developed.

“What is the likelihood that that would happen? It never would,” Carter said about the maximum development ranges for all plans. “You could go to Alexandria. You could go to the most developed places in Virginia, and they’re not fully developed.”

The first map presented was the land use map adopted in 2013, which would allot 24,000 acres on two-acre lots for 12,000 potential units for a low-intensity residential area around Cartersville Road and Cartersville Extension.

A possible benefit of using the land surrounding Cobbs Creek Reservoir, which is scheduled to begin its second phase in June, would be to attract commercial and residential developers to the area, Carter said.

“It’s opening a door,” Carter said, who also said the fullest realization of the developed land may take between 25-30 years and that the most dramatic changes may not be seen for the first 20 years.

Members of the community, particularly those who live close to the reservoir site, expressed concerns of the development’s impact on the county.

Carter admitted that certain phases of development over the next four to five years in certain areas may be difficult, particularly for those who live close to the reservoir site.

“That is why I think the best thing we can do for you is give you an explanation,” Carter said, noting that email, call and letter lists will be used to notify residents of any construction that might be underway.

Some in the audience cited fears of industrial corporations near the reservoir or near residents in the county, particularly the possibility of waste or septic issues threatening the reservoir.

Charles Lewis, who lives in Henrico but owns land in Cumberland, wanted to know the long-term impact of development and expressed concern of the impact particularly by industrial corporations that may have interest in the site.

Osl suggested industrial sites that focus on agricultural projects, using an example of a plant he visited in another state that mainly cultivated and sold orchids.

“Could we do something like that? I don’t know,” Osl said, who also mentioned a Tyson’s plant in Henrico County as an example of an industrial company similar to one that may express interest in the area.

Lewis cited concerns of waste or pollution if a plant like Tyson’s operated in Cumberland, particularly near the reservoir. Lewis made comparisons with pig farms in North Carolina that he said produce billions of gallons of untreated waste, which could pose risks to the area’s drinking supplies if lagoons containing the waste spilled into lakes and other bodies of water.

Osl, in a statement after the meeting, said he thought the meeting was positive for both the community and staff.

“Starting from a blank piece of paper can be challenging and frustrating, so … Carter did well to give a series of proposals for discussion,” Osl said. “This led to good interaction and dialogue with the citizens.”

Graduates meet ‘the next phase’