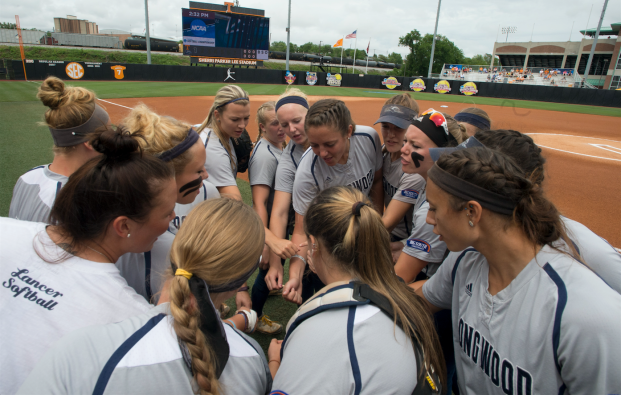 JOY KIMBROUGH Longwood University’s softball team members share a moment of solidarity Sunday at Sherri Parker Lee Stadium in Tennessee as they played for an NCAA regional championship for the second consecutive year.

A historic 2017 campaign ended for Longwood University’s softball team Sunday with a 3-0 loss to host and national No. 8 seed University of Tennessee in the NCAA Knoxville Regional championship round.

But a Lancer season that initially appeared headed for significant disappointment ended up featuring nearly all of the success and progress fans were hoping for.

The Lancers’ surprisingly poor start to regular season conference play created some doubt about them qualifying for the Big South Tournament that they would be hosting for the first time and that they were picked by opposing coaches as the preseason favorite to win.

The Lancers’ 7-14 run through the first month of the season and slow start in conference play made it seem quite possible this would be the first season in Head Coach Kathy Riley’s 20-year tenure that they finished below .500.

But Longwood guaranteed the incredible streak would stay alive by winning an NCAA Tournament game, and then when it won another, it secured a winning record, finishing 30-29.

The Lancers’ subpar record compared to previous years may have made some think they were less likely to make an impact in the NCAA Division I Softball Tournament this season.

But Longwood reproduced the 2-2 run achieved by its 2016 squad that went 40-20 and in doing so became the Big South’s new all-time leader in NCAA postseason wins. The Lancers are now 5-8 in the NCAA Division I tourney.

“We came into this tournament with a goal that we were going to make it to the regional championship, and we achieved that goal,” said Longwood senior shortstop Justina Augustine.

Longwood came the closest it ever has to winning a game in the NCAA regional title round, holding Tennessee (47-10) to three runs on 12 hits.

On offense, however, Longwood was not able to find much success against sophomore pitcher Matty Moss (25-2), who held the Lancers to one hit in the Volunteers’ 5-0 win Friday.

“Matty threw 19 out of 25 first-pitch strikes in the game that we lost, the first game of the tournament,” Riley said Sunday. “And so today, what we really wanted to do was go in and be more aggressive early in the count, and probably if you said, ‘Well, what was one failing that we really had today?’ I think that was it.”

Tennessee junior shortstop Meghan Gregg went 2-for-4, hitting an RBI single in the first inning and then a solo home run in the fifth.

Entering the NCAA tourney as the regionals’ No. 4 seed of the Knoxville Regional, the Lancers produced an upset doubleheader Saturday. They eliminated the regional’s No. 2 seed and the 25th-ranked Ohio State University (35-18), and the regional’s No. 3 seed, University of South Carolina (USC) Upstate (45-13), earning the right to play for an NCAA regional championship for the second consecutive year.

In the wake of her team’s fourth- and fifth-ever NCAA tourney victories, Riley said Saturday that she felt great “in a sense that we came in and we had a pretty large task in front of us, and for us to be able to play 14 quality innings like we did today, there’s really nothing to say but that we were super-resilient, and I’m really proud of the kids.”

In its first game Saturday, Longwood never trailed on its way to a 3-1 victory against Ohio State, getting on the scoreboard in the bottom of the fourth inning via a two-out RBI double by junior left fielder Glenn Walters.

Gay kept the powerful Buckeye offense at bay, pitching a complete game and allowing only four hits, one earned run and one walk while throwing two strikeouts.

The Lancers also had only four hits, but they made them count. Walters went 2-for-3 with an RBI, sophomore catcher Kaylynn “Bug” Batten went 1-for-2 with an RBI and a run scored, sophomore center fielder Jordan Clark had a hit and an RBI and Smith also had a hit.

Other run scorers for Longwood included Augustine and Kelly.

Longwood had only about 30 minutes between its elimination games against Ohio State and USC Upstate, and Riley explained how she and her players managed that quick turnaround.

“Instead of really trying to insert myself, I really tried to leave them alone, just let them get ready,” she said. “And they’ve done a super job of that, really, in the last three or four weeks of this season of not having to be motivated all the time. They were really doing those things themselves.”

They went on to orchestrate a 4-2 victory over USC Upstate, with Walters once again serving as the tip of the lance for Longwood. She hit a three-run triple in the first inning that scored Kelly, Clark and redshirt sophomore designated player Karleigh Donovan.

“It was awesome,” Walters said. “I really wanted to win that game. I wanted to make history again, so I just saw that first pitch and gave it a ride.”

Later in the inning, she scored, as well, to give her team a 4-0 lead.

Longwood’s four hits in the game came from Walters, Augustine, Batten and Donovan.

Elizabeth “Biz” McCarthy (15-10) earned the win in the circle, allowing eight hits but only two earned runs and no walks while adding a strikeout in 5.1 innings. Gay pitched the final 1.2 innings to earn the save.

Referring to her players Saturday, Riley said that “these girls are finding more about who they are when they play these games. Last year was a different team, and this year’s team, the last part of the season, is really starting to feel a lot more confident about who they are and what they could accomplish, and these games, like today and yesterday, do that for us.”

The Lancers won 14 of their last 18 games this season.

Support from back home in Farmville poured in for the Lancers on social media Saturday, which was graduation day for Longwood, and Gay shared what that meant to her and her teammates.

“It’s not like being at home and actually having the fans with you there, but you know in your heart they’re there with you,” she said. “Just because we come from a small town doesn’t mean we don’t have a big group of people that support us. So knowing that we have them there gives us more confidence, I think, and just lets us have more fun.”

Sunday’s game marked the final appearance in a Lancer uniform for Augustine, Jenna Carnes and McCarthy.

“All three of those girls are different in their personalities, but just the things that they’re willing to do in terms of sacrifice is pretty impressive and something that we’re really proud of them for,” Riley said Sunday.

Reflecting on the opportunity to play in three different NCAA regionals with Longwood, Augustine said, “All players wish that they could get this experience, so doing it three times was amazing in my four-year career, so I’m very thankful for that.”