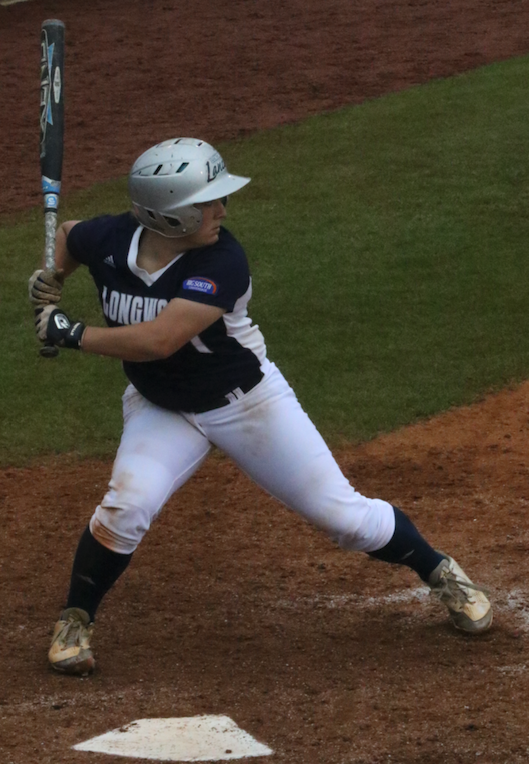 TITUS MOHLER | HERALD Longwood University sophomore Kaylynn Batten awaits the pitch against Campbell University on Thursday during the 2017 Big South Softball Tournament at Lancer Field. Batten was one of five Lancers to produce hits in the 8-4 victory over the Fighting Camels.

The third-seeded Longwood University softball team defeated No. 2 Campbell University 8-4 Thursday afternoon to advance to the semifinals of the 2017 Big South Softball Championship in Farmville.

With this victory, the Lancers returned to .500 for the season, successfully recovering from a slow start. They carry a 26-26 record into Friday’s 2:30 p.m. showdown with No. 1 Liberty University (36-20), which won 11-3 against No. 4 Charleston Southern University in five innings Thursday.

During the regular season, March 18-19, the Lancers lost a three-game series to Campbell, two games to one.

“Just think again, us battling back this season and just where we’re at right now compared to where we were a month and a half ago is pretty exciting for us,” she said.

Pointing to her players, she added, “Just to see them enjoy the game the way it’s supposed to be enjoyed and see them excited about playing softball, that’s the best thing.”

The Lancers have never finished a season below .500 during Riley’s tenure as their head coach. She is now in her 20th season leading the team.

Longwood took a 1-0 lead in the first inning Thursday and added two more runs in the top of the third, but then Campbell ended the inning by tying things up, 3-3.

The fifth inning proved to be key as Longwood produced five runs, gaining a sizable lead.

Riley said that after the Fighting Camels scored their trio of runs in the third, she felt like her players “kind of started to rush the game just for about 10 minutes, and then all of a sudden they started to settle back down, and when they settled down and started to let the game come back to them, then I thought that’s when we really made a big push.”

Redshirt sophomore Karleigh Donovan, who struggled early on this season at the plate, went 2-for-3 with three RBIs and two runs scored Thursday.

“I feel a lot better,” she said, referring to her confidence level. “I just really cleared my head when I walked into the box.”

Sophomore Kaylynn Batten was also 2-for-3, scoring twice and adding an RBI. Also registering hits were senior Justina Augustine, freshman Kasey Carr and freshman Destiny Martinez, who each had one.

“I think the fact that the team is really spreading things out right now speaks well for us because it’s not just one girl doing all the hitting,” Riley said. “It’s all through the lineup we’ll get one or two hits, and so I think it’s tougher to get us out because of that. I think we have confidence all the way through that anybody out of one through nine can get hits, and so we’re in a pretty good place as far as being a team is concerned.”

Sophomore pitcher Sydney Gay made a brief appearance in the circle, but she has been limited by a foot injury, and Riley said she is not at 100 percent yet.

“I just didn’t think she was ready to make the adjustment to go throughout the game, and that’s why I went ahead and went with Biz,” the coach said.

Senior pitcher Elizabeth “Biz” McCarthy improved to 13-8 for the season with the win.

The prospect of rain accompanies Longwood’s scheduled contest Friday against Liberty, a team the Lancers defeated two out of three times in the regular season.

“Right now I’m hoping that the rain will hold off even though it doesn’t look good, but in all reality, if it gives us a chance to go ahead and have Sydney work and get healthier, that’s only an advantage for us when we do get back,” Riley said. “But just in terms of Liberty, they’re just a really well-rounded team, and I think, again, for us, if we just come out and approach it like we have, and that’s one game at a time, and we’re believing in what we’re capable of doing, then we’re going to give them all that they can handle.”