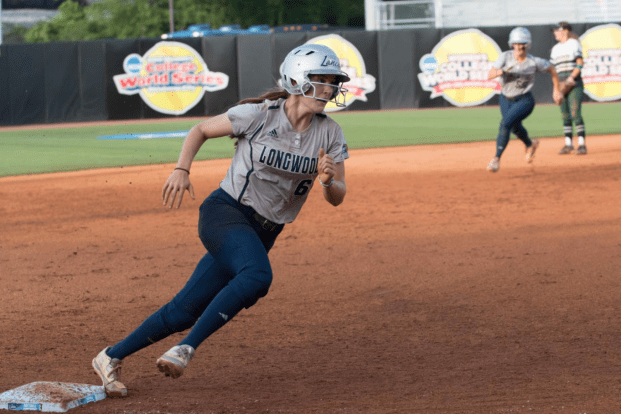 JOY KIMBROUGH Longwood University freshman second baseman Destiny Martinez advances on the bases along with senior shortstop Justina Augustine, in the background, against the University of South Carolina Upstate on Saturday. As a team, the Lancers advanced to Sunday’s NCAA regional championship round.

Entering the tourney as the No. 4 seed of the Knoxville Regional, the Lancers produced an upset doubleheader Saturday. They eliminated the regional’s No. 2 seed and the national No. 25 seed, Ohio State University (35-18), and the regional’s No. 3 seed, University of South Carolina (USC) Upstate (45-13), earning the right to play for an NCAA regional championship for the second consecutive year.

No Big South team has ever been as successful in the NCAA Tournament as Longwood has now become.

In the wake of her team’s fourth- and fifth-ever NCAA tourney victories, Lancers Head Coach Kathy Riley said Saturday that she felt great “in a sense that we came in and we had a pretty large task in front of us, and for us to be able to play 14 quality innings like we did today, there’s really nothing to say but that we were super-resilient, and I’m really proud of the kids.”

The regional title round begins Sunday at 2:30 p.m. on ESPN3 as Longwood (30-28) will have a rematch with national No. 8 seed University of Tennessee (46-10), to which it lost 5-0 Friday evening in its first NCAA Tournament action this year. The Lancers will need to defeat the Volunteers twice to claim the regional title and advance to the NCAA Super Regionals.

In its first game Saturday, Longwood never trailed on its way to a 3-1 victory against Ohio State, getting on the scoreboard in the bottom of the fourth inning via a two-out RBI double by junior left fielder Glenn Walters.

Lancers sophomore Sydney Gay (15-15) kept the powerful Buckeye offense at bay, pitching a complete game and allowing only four hits, one earned run and one walk while throwing two strikeouts.

The Lancers also had only four hits, but they made them count. Walters went 2-for-3 with an RBI, sophomore catcher Kaylynn “Bug” Batten went 1-for-2 with an RBI and a run scored, sophomore center fielder Jordan Clark had a hit and an RBI and sophomore right fielder Jessica Smith also had a hit.

Longwood had only about 30 minutes between its elimination games against Ohio State and USC Upstate, and Riley explained how she and her players managed that quick turnaround.

“Instead of really trying to insert myself, I really tried to leave them alone, just let them get ready,” she said. “And they’ve done a super job of that, really, in the last three or four weeks of this season of not having to be motivated all the time. They were really doing those things themselves.”

They went on to orchestrate a 4-2 victory over USC Upstate, with Walters once again serving as the tip of the lance for Longwood. Against one of the top pitching staffs in the country, she hit a three-run triple in the first inning that scored Kelly, redshirt sophomore designated player Karleigh Donovan and Clark.

“It was awesome,” Walters said. “I really wanted to win that game. I wanted to make history again, so I just saw that first pitch and gave it a ride.”

Later in the inning, she scored, as well, to give her team a 4-0 lead.

Longwood’s four hits in the game came from Walters, Augustine, Batten and Donovan.

Senior Elizabeth “Biz” McCarthy (15-10) earned the win in the circle, allowing eight hits but only two earned runs and no walks while adding a strikeout in 5.1 innings. Gay pitched the final 1.2 innings to earn the save.

Support from back home in Farmville poured in for the Lancers on social media Saturday, which was graduation day for Longwood, and Gay shared what that meant to her and her teammates.

“It’s not like being at home and actually having the fans with you there, but you know in your heart they’re there with you,” she said. “Just because we come from a small town doesn’t mean we don’t have a big group of people that support us. So knowing that we have them there gives us more confidence, I think, and just lets us have more fun.”

Now the Lancers take on a similar task to the one they faced last year. After losing their opening game of the 2016 NCAA Harrisonburg Regional, they rebounded to top Princeton University and the University of North Carolina, sending them to the regional title round against host and national No. 7 seed James Madison University. They lost 5-1 to the Dukes.

But this year, Gay indicated that they take lessons not only from their NCAA Tournament experience last year but also their Big South Softball Championship-winning experience last weekend in Farmville against Liberty University.

“When we lost against Liberty the first time and had to play them again for (the) championship … the next day, it’s just coming back from a loss, I think you come back even tougher because you know that you have to play even better than you did the day before,” she said, “and you’re playing really good teams, like here, we are, and I don’t think we take anything for granted.”

Riley said that “these girls are finding more about who they are when they play these games. Last year was a different team, and this year’s team, the last part of the season, is really starting to feel a lot more confident about who they are and what they could accomplish, and these games, like today and yesterday, do that for us.”

The Lancers have now won 14 of their last 17 games this season.

The fourth-seeded Fuqua School varsity baseball team scored first and twice came back to either tie or lead No. 2... read more