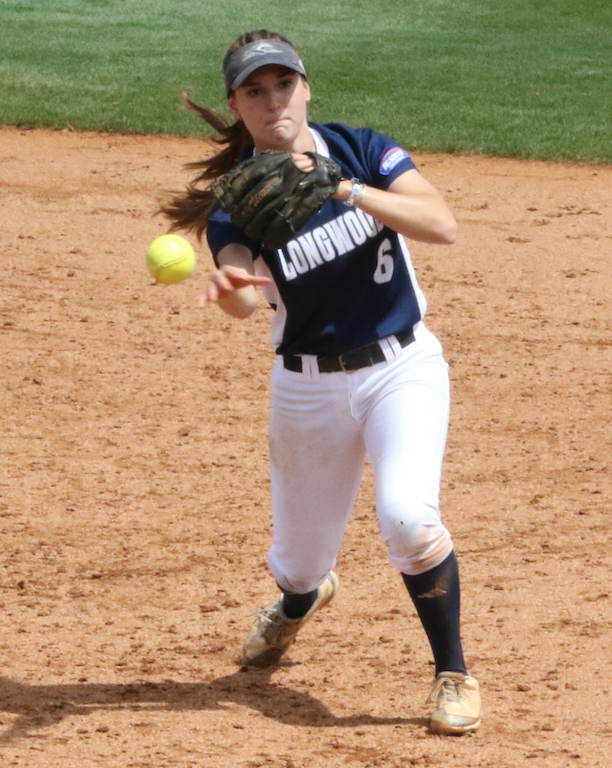 TITUS MOHLER | HERALD Longwood University freshman second baseman Destiny Martinez sends the ball to first base for an out during the third-seeded Lancers’ 7-4 victory over No. 1 Liberty University in the semifinals of the 2017 Big South Softball Championship on Saturday afternoon in Farmville.

The third-seeded Lancers won 7-4 against No. 1 Liberty University in the Saturday afternoon semifinal game to remain undefeated in the tourney and advance to the championship game set for 7 p.m. Saturday evening. It is their third straight appearance in the title game.

“We wouldn’t have guessed this five weeks ago,” Longwood Head Coach Kathy Riley said. “We understand that there’s more work to do, but just to have the kids perform this well up to this point, we couldn’t really ask for anything else, because I think they’ve just been super-resilient in terms of every time they’ve had a little bit of a challenge, they withstood it.”

After the Lancers took a 2-0 lead in the top of the first inning, the Flames responded with two runs of their own. When the Lancers added another run in the fourth, so did the Flames. Then Liberty took a 4-3 lead in the fifth, but it had no response to Longwood’s four-run burst in the sixth.

Lancers sophomore Kaylynn Batten went 2-for-3 with two RBIs and two runs scored. The resurgent redshirt sophomore Karleigh Donovan continued her successful run in the tournament by hitting a two-run double to deep right center field in the sixth inning that drove in two runs and gave her team the lead for good.

Sophomore pitcher Sydney Gay relieved senior Elizabeth “Biz” McCarthy in the fifth inning and picked up the win the improve to 14-13 on the year.

The third-seeded Longwood University softball team defeated No. 2 Campbell University 8-4 Thursday afternoon to advance to the semifinals of... read more