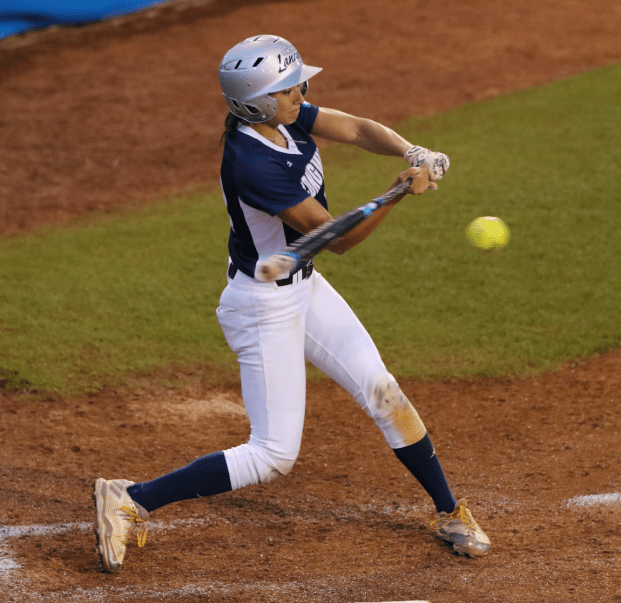 TITUS MOHLER | HERALD Longwood University freshman Jordan Clark swings against Liberty University during the first of two Big South Softball Championship title games. The third-seeded Lancers lost 9-3, but they will get another shot to win the title Sunday at 1 p.m. against the No. 1 Flames.

Because the third-seeded Lancers had been undefeated in the tourney until that point, they will have another shot to win the conference title against the No. 1 Flames on Sunday at 1 p.m.

Saturday night started well for Longwood, as it went up 1-0 in the second inning when junior Glenn Walters scored on a sacrifice hit by freshman Kasey Carr. In the third inning, senior Justina Augustine hit a solo home run over the left field fence to make the score 2-0.

But the Flames responded in the fourth inning with four runs, aided by a Longwood error and a bunt. Liberty added four more runs in the top of the sixth to go up 8-2.

The Flames added one more run in the seventh, as did the Lancers, a moment before the final out of the game occurred.

“I thought it was two good teams that were playing each other, and they had two innings where they just made some plays and put some pressure on us, and we made a couple mistakes,” Longwood Head Coach Kathy Riley said. “And to their credit, they did put the pressure on us in those innings. I didn’t think that we played poorly. We had really good at-bats.”

On offense, the Lancers had only one strikeout.

“I really was going to stick with Sydney (Gay) most of the game today,” Riley said. “If you think about it, they only had two or three hits up until like the sixth inning. So, it wasn’t like that they were really hitting her hard. They really hurt us more with just getting the ball on the ground and running than they did hitting us really hard.”

Because of this, Riley said the decision of who to start in the circle for Sunday’s deciding game will not be an easy one, and it may be a call she and her staff make on the day.

As her team enters the second title game, she wants to see them come out and play with confidence.

“And I was telling (them) that chips are going to fall where they fall,” she said Saturday. “The main thing is we just need to give ourselves an opportunity to have good things happen to us, and so yeah, we can’t press too hard tomorrow. What we’ve got to come out and do is be ready from the first pitch and just play good, hard softball. And I think if you looked at Liberty today, that’s what they did. It wasn’t, again, that they were hitting every pitch that we threw up there. They just played hard and got some balls down and put pressure on us, so I’d like to return the favor to them tomorrow.”

During the regular season, the Lancers (27-27) defeated Liberty (38-21) two games to one in a three-game series. They will get a chance to repeat that result Sunday with the first pitch scheduled to be thrown at 1 p.m. at Lancer Field.