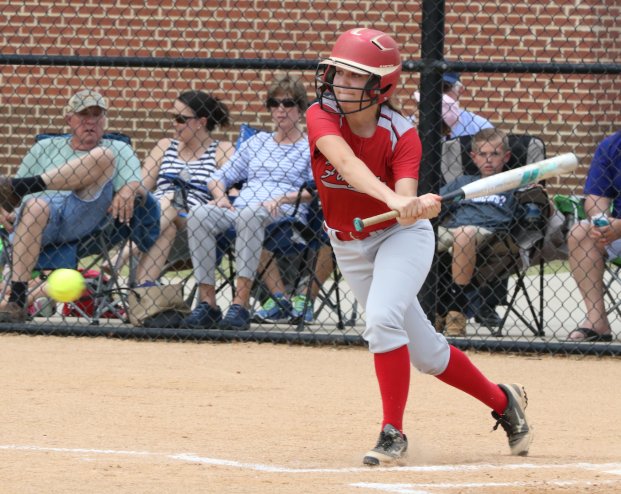 The No. 1-seeded Fuqua School varsity softball team struck first Friday, but No. 3 Southampton Academy responded with a trio of runs after a weather delay and went on to win the Virginia Independent Schools Athletic Association (VISAA) Division III state championship game 3-1 in Sutherland.

“I thought the effort was there,” Lady Falcons Head Coach Mike Ford said of his team’s play. “We could have swung the bat a little better, but they got all their hits in one inning, and we spread ours out, so that’s the way it goes in these games. But just a tough game.”

To a certain degree it was the tale of two halves. Fuqua kept the Lady Raiders off the scoreboard with solid defense and pitching early, and in the bottom of the third inning with no outs, Lady Falcons sophomore Gracie Hodges hit a solo home run over the left field fence.

“She’s shown power,” Ford said, adding that in a game earlier in the season played on a big field, she hit a ball to the fence that would have been a homer on a regular-sized field. “She hits them in practice from time to time, so I was glad to see her get a hold of one.”

A couple pitches later, a weather delay began that lasted for a little more than hour.

After play resumed, junior Alexa Marzloff singled, but Fuqua could not generate any more offense. Then the Lady Raiders went to work in the top of the fourth inning.

“They scored their runs the first inning back from the rain delay,” Ford said.

Southampton took the lead off of a two-run single, and then an error allowed the Lady Raiders to score a third run.

Thinking about the impact the unscheduled intermission had on his team, Ford said, “You lose a lot of momentum. You might not have had enough time to get loose down here. There’s different factors, but once we gave up the three runs, we buckled back down, but we just couldn’t piece enough hits (together), needed one or two hits we didn’t get today.”

Fuqua generated four hits for the game, three before the rain delay. Marzloff had two hits, and sophomore Regan Ware had one.

“We had fun. I’ve seen the girls get better all through the year — I mean every player out there,” Ford said. “… I’m going to send them all off to the summertime, put them to work and tell them what I want them doing. And I expect to be better next year. I expect us to come in starting the season better than we finished right now and just grow from there.”

Six senior student-athletes made Monday a big day for Cumberland athletics as they formally announced their commitments to continue their... read more