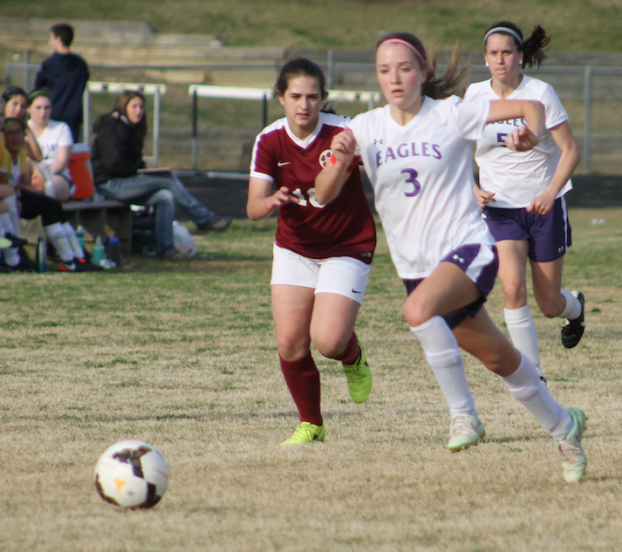 The upperclassmen-laden Prince Edward County High School’s girls soccer team entered this week with a 6-3-2 record, either winning or tying seven out of its last eight games.

Her team faced visiting Park View High School, of South Hill, on Thursday in a contest infused with rain that she and her staff figured would put a damper on the Lady Eagles’ performance.

“But the girls stepped up,” she said.

Prince Edward won 4-1 Thursday and was led in scoring by junior Katelyn McAbee with two goals. All four goals were assisted by junior Samantha Buczek.

Speaking Friday with three games left on her team’s regular season schedule, Coach Buczek was pleased with how the Lady Eagles’ performance was trending.

“I think they’re going to finish really strong and be ready for a good season next year again,” she said.

Last season, Prince Edward fell in the first round of the Quad Rivers Conference 34 tournament, but Buczek said she sees potential for her team to go further this year.

She also hopes to see her team perform better against district foe Goochland High School in the regular season, with a second game against the Lady Bulldogs set for Tuesday.

Standout players for the 2017 Lady Eagles include Samantha Buczek, a center midfielder.

“She’s really strong,” Coach Buczek said of her younger sister. “She gets just about all of the assists and brings the ball up from defense to forward, and then Natalie Cheyne puts in pretty much all of our goals.”

Additionally, newly-placed goalkeeper, junior Jayden Comer, has “really done amazing so far because that was like a midseason change for us,” Coach Buczek said.