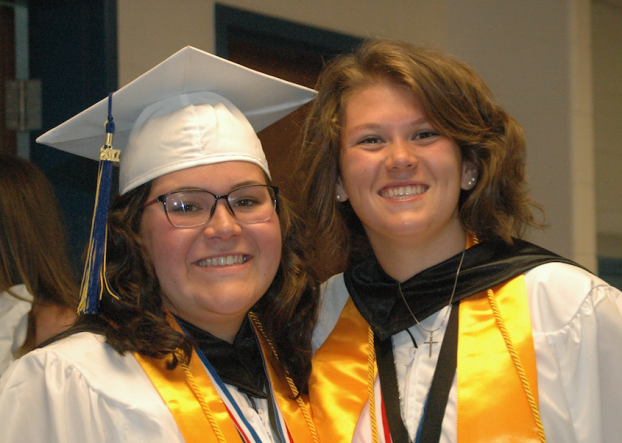 Nearly 100 seniors and hundreds more faculty, family members and friends flooded the Cumberland County High School gymnasium to cheer on the Class of 2017 on Friday.

A common theme throughout the ceremony was fond memories of the students’ experiences coupled with confidence and excitement in meeting the challenges that would accompany their futures.

Ninety-five seniors walked across the stage to receive their diplomas. Among those were dozens of students who also received their associate’s degrees or a certification as a certified nursing assistant, an emergency medical service member or a welding technician.

The Class of 2017, according to High School Principal Dr. Jeffrey Scales, received $491,000 in scholarships and reached and won division and state championships and competitions in forensics, cross country, volleyball, football, basketball, wrestling, soccer, softball and track.

In addition to the students’ successes, the ceremony also focused on graduates’ futures.

Valedictorian Kaylah Paras addressed the class, saying the future for them would be met with excitement instead of anxiety.

“Everyone is telling us it’s time to face the real world — a place of responsibility and self-reliance and freedom,” Paras said. “I say, instead of letting this reality drag us down, we hit the ground running, embracing every twist, turn and hiccup.”

She also noted the importance of living life to the fullest in order to make memories.

“I think I can speak for each of us when I say we don’t want to live our lives in ‘could haves’ and ‘what ifs,’” Paras said. “Instead, we will create lives full of ‘remember whens.’ After today, the ‘remember whens’ are all that will remain.”

Paras described her memories at Cumberland in her address to her classmates. She said her class had the best spirit week hallway two years in a row, cited the girl’s basketball team making it to the state tournament and noted the silly antics that ensued when a hypnotist came to the school.

“One day, we will look back on memories like this and realize we’ve spent the past four years building an inseparable bond with each other,” Paras said, “a bond that neither time nor distance will break.”

Salutatorian John Jeffries spoke similarly about the bond between his classmates. He described the different definitions of the school’s mascot, a Duke: a person of stature, someone ready to fight, and even a type of cherry.

Jeffries said the students, who had integrity, fight and compassion, created their own definition of a Duke.

“Many of the people in these seats show what a Duke is every single day,” Jeffries said. “The dutiful acts that these students have displayed over their time … is only the beginning of the things they can do.”

“No matter how far you go from this place, you will always be a Duke,” he offered.

Like Paras, Jeffries encouraged the class to face the future with hope, knowing they had endless opportunities to succeed.

“Once we leave this school, the entire world will be laid out before us,” Jeffries said. “It might take a while to get to where we want to go, but it’s still there waiting for you.”

Scales encouraged and challenged the class, asking if they were prepared to enter the world outside the high school.

Quoting Michael Jackson’s “Man in the Mirror,” seeking to empower students to make changes within themselves in addition to those around them, Scales displayed confidence toward the students by giving his own answer as to whether they were ready for the future.

“My answer is this: yes.” Scales said. “Yes, you are very prepared for any change that you will face from this day forward.”

Family members also expressed confidence and excitement for the graduates.

A ribbon cutting ceremony was held for the recently-completed outdoor classroom at Prince Edward County High School on Tuesday. In... read more