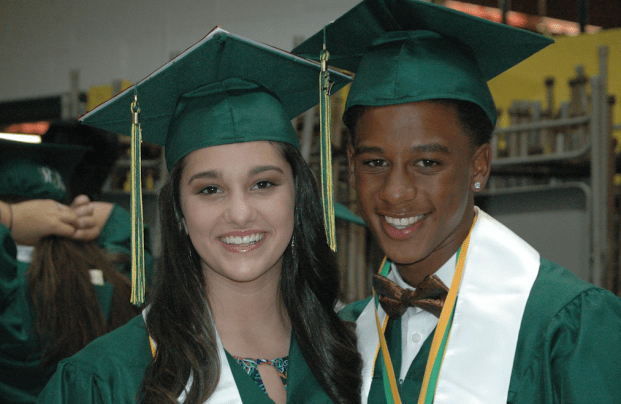 Graduates look to the future

Nearly 130 seniors at Buckingham County High School (BCHS) turned their tassels and walked across the gymnasium stage to become the graduating Class of 2017 on Friday.

Family members, friends and loved ones poured into the school’s gymnasium and the auditorium, where the ceremony was projected on a screen.

Many of the graduates also made strides with their college careers, about 40 students having college-level certification or having been enrolled at Southside Virginia Community College (SVCC), obtaining their associate’s degrees at the same time as their high school diplomas.

Roethel praised the students’ compassionate and socially-aware behavior, which he said came through in school and their community service.

“Please, never lose that compassion,” Roethel said, “for it is a great gift.”

Roethel challenged the students to remain civil and open-minded, even in disagreements, to thank parents and teachers for their support, and to work responsibly to do what is right.

“We are all responsible for our actions,” Roethel said.

The senior class presented Roethel with a memorial bench as a gift, which they said hope will inspire fond memories of Roethel’s influence.

Snead’s comments to the graduates focused on gratitude and said it is often a more valuable trait to know how to appreciate one another than to accept praise.

“Appreciating someone else now sets us up for fond memories later on,” Snead said, who shared his own memories interacting with the Class of 2017 during their high school years.

Wise spoke about preserving character over academic success or perfectionism, saying that a C on a paper will often not define someone as much as their behavior.

Wise will attend the College of William & Mary to study computer science in the fall.

“Your character is one of the most valuable things,” Wise said.

He encouraged students to learn, and not allow uncertainty or mistakes to define them.

“Go on, and don’t be afraid of making mistakes,” Wise said. “Go on, and learn as much as you can.”

DeLong-Maxey spoke about the diversity that makes up the student body and celebrating it.

“We are … athletic, funny, smart,” said Maxey, who will attend the University of Virginia.

“We are artistic. We are leaders, kind. We are generous. We are photogenic. But most importantly, we are unique individuals, and we are here today, as people, to take the next step in life.”

Maxey thanked her parents, teachers and student body for their support.

Following commencement, families and students flooded the hallway leading to the cafeteria, taking photos and giving graduates flowers and balloons as gifts.

Laquinta Thurston, who attended daughter Trenae Toney’s graduation with her father and relatives, said she thought the ceremony and Class of 2017 were remarkable, and she and her husband said Thurston made a point not to cry during the ceremony.

“It was a good class,” Thurston said.