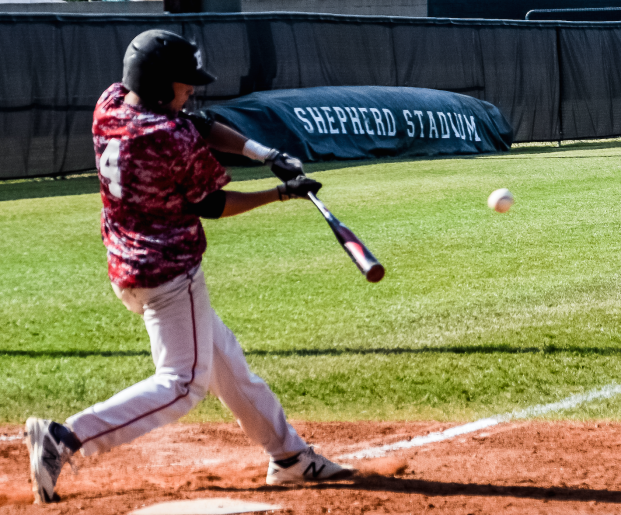 JOE MOORE Fuqua School freshman Colton Copley eyes the ball against Walsingham Academy on Thursday during the VISAA Division III state semifinals at Shepherd Stadium in Colonial Heights. He contributed two hits to the No. 4 Falcons’ upset of the No. 1 Trojans.

Fuqua School’s fourth-seeded varsity baseball team took down the No. 1 seed in the Virginia Independent Schools Athletic Association (VISAA) Division III state semifinals Thursday to return to the state championship game for the second time in the last four years.

“It’s what we set our goal to at the beginning of the year,” Falcons Head Coach John Adams said. “We’re just so blessed to be able to have a chance to play for a state championship.”

The Falcons (11-5) will face No. 2 Southampton Academy in the title game Saturday at 11 a.m. at Shepherd Stadium in Colonial Heights.

To reach that final stage of the postseason, Fuqua followed up a 14-7 state quarterfinal win over visiting No. 5 Kenston Forest School on Tuesday with a 4-2 win Thursday against No. 1 Walsingham Academy at Shepherd Stadium.

The Trojans took a 1-0 lead in the first inning. The Falcons tied the game in the top of the second, but Walsingham scored again in the bottom of the inning to regain the advantage.

The third inning proved to be the deciding one of the game as Fuqua produced three unanswered runs.

On the day for the Falcons, junior Tyler Thomas went 2-for-3 with two RBIs, junior Hunter Gilliam went 2-for-3, had a walk and scored a run, and freshman Colton Copley went 2-for-4, including two doubles, with one run scored.

Sophomore Christian Adams and freshman Matt Osborn each recorded a hit, and both Osborn and junior Clay Osborn were walked, which scored runs in bases-loaded situations.

Coach Adams noted the Falcons executed a state title run in 2014 in almost the exact same fashion as they have this year.

“(We) were the lower seed in 2014, rolled through, made it to the state finals and played Southampton in the championship and beat them,” he said.

He hopes history will repeat itself Saturday but observed the kind of challenge the Raiders will pose during their 12-1 semifinal victory over No. 3 Carlisle School.

“We’re going to have to play some defense,” he said. “They put the ball in play.”

On Thursday, “I think we turned three double plays which got us out of some tough innings,” he said. “(We’re) going to have to do the same thing … and we’re going to have to also match some hits.”

Fuqua School’s No. 1-seeded varsity softball team held off No. 4 Kenston Forest School 7-6 on Thursday to advance to... read more