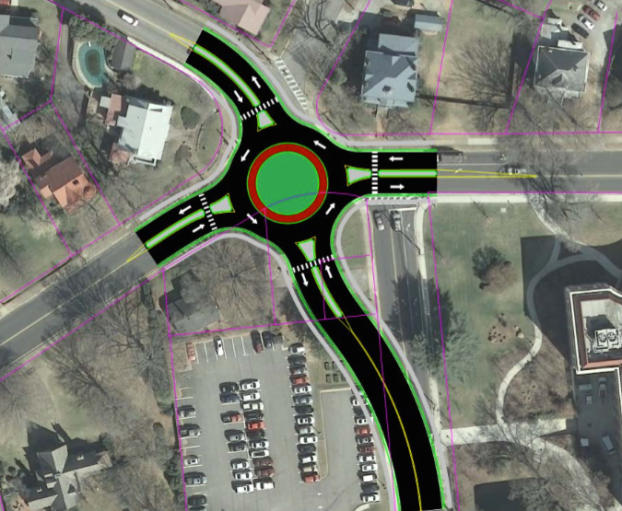 Roundabouts, firm officials said, “reduce the number of conflict points … and they reduce the speed through an intersection as an average.”

A meeting will be held May 31 for the community, along with town leaders, to learn of the recommendation from engineering firm Taylor McCormick on proposed improvements at the intersection of Oak and High streets and Griffin Boulevard.

Being considered are a realignment of the busy intersection, or constructing a roundabout.

The meeting will be held in the town council’s chambers in town hall in downtown Farmville.

In late February, more than 50 people gathered to learn more about the engineering study that will net the recommendation of how to improve the intersection. 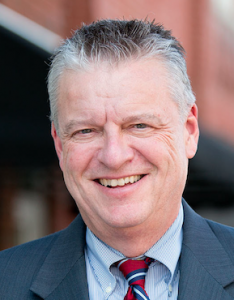 The announcement of the meeting came from Town Manager Gerald Spates during council’s May 10 meeting after Adam Yoelin, who lives in the home on the knoll that overlooks the intersection — endorsed the idea of a roundabout.

“Let’s build a roundabout,” Yoelin said at the beginning of his comments to members of the town council.

After commending Public Works Director Robin Atkins, he discussed the construction costs of a roundabout, comparing it to what he called wasted time at a signalized intersection.

“…I thought about the other side of the perspective — what about the cost of the intersection? How do we apply that toward this decision that we all have to make here? I thought the only fair way to do that would be to try and equate it financially. How do you do that? You look at the things that you can control or can’t control, like the timing of the lights.”

“If you’re commuting, coming to and from, using that light twice a day … that’s two minutes a day (spent at the intersection),” Yoelin said, explaining the time spent in one week and one year. “Basically you spend almost nine hours waiting at that light.”

Yoelin said he was “trying to quantify this” and give council members “something to look at and think about when you’re deciding on the future of this intersection.”

“Let’s just be clear: the intersection as it is right now, that’s not free,” Yoelin concluded.

“We hope that residents will attend the community meeting to learn more about the intersection study and the recommendation,” Mayor David Whitus said in a 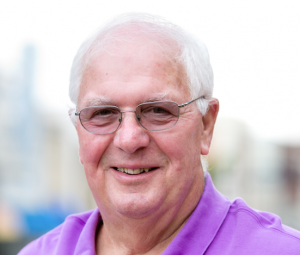 statement regarding the upcoming meeting. “This is an excellent opportunity for residents to express their views and ask questions about the different options.”

Officials with McCormick Taylor — the engineering firm conducting the study — led the over hour-long discussion with the group in February, discussing the pros and cons of a realignment of the intersection and the potential for a roundabout.

“We are excited to hear their recommendation and to hear the opinions of residents so that a well-informed and thoughtful decision can be made to effectively address the issues at that intersection,” Town Manager Gerald Spates said in a statement regarding the upcoming meeting.

The town council’s decision to contract with the Glen Allen-based engineering firm comes with a price tag of $44,000 — one that’s being split with Longwood University, which has a roundabout in its Master Plan.

Before the Februmeeting began people mingled, looking at displayed design alternatives on easels. The three graphics depicted the three alternatives the firm is studying: A, no change at intersection; B, a traditional realignment of the intersection with traffic signals; or C, a single-lane roundabout.

Faye Green, a member of a small group of people who live on The Avenues advocating for a roundabout project, handed out yellow pieces of paper containing facts about roundabouts.

“That’s our base; that’s what we’ve got,” DeBerry said of Alternative A, which is no change at the intersection. His presentation listed pros of the alternative as no impacts to right-of-way, utilities and environment, and a con as a poor level of service for pedestrians, trucks and vehicles. 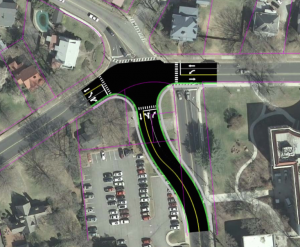 Engineering firm McCormick Taylor presented three alternatives for improving the intersection at Oak Street, High Street and Griffin Boulevard during a community meeting in February before more than 50 members of the community. The above graphic depicts a signalized traditional intersection realignment, which could cost less and take less time to build than the roundabout alternative.

A traditional realignment with a signalized intersection is Alternative B. “You just basically move it over so the signal can operate more efficiently. (It) should give us some improvement,” DeBerry said.

According to the presentation, pros of the realignment include the project being “a little cheaper” than a roundabout, fewer utility and drainage conflicts, signalized pedestrian movements and constructability.

A con of the alternative is “efficiency lower than a roundabout.”

Alternative C, the roundabout, came with pros of safety and less conflict points.

“We need to understand the conditions that exist out there today and what we’ll be analyzing,” he added.

Cons of the roundabout include costs, a larger footprint and maintenance of traffic during construction.

“They’re a little more to construct,” DeBerry said, noting, “while you’re building them can be tough because you’ve got to impact all four directions of traffic that are coming into this circle.” Initial driver confusion was also listed as a con of the project.

According to DeBerry, roundabouts have “lower maintenance costs, generally.”

The Farmville Town Council has approved a conditional use permit sought by Mark and Laura French to build nine cottages... read more