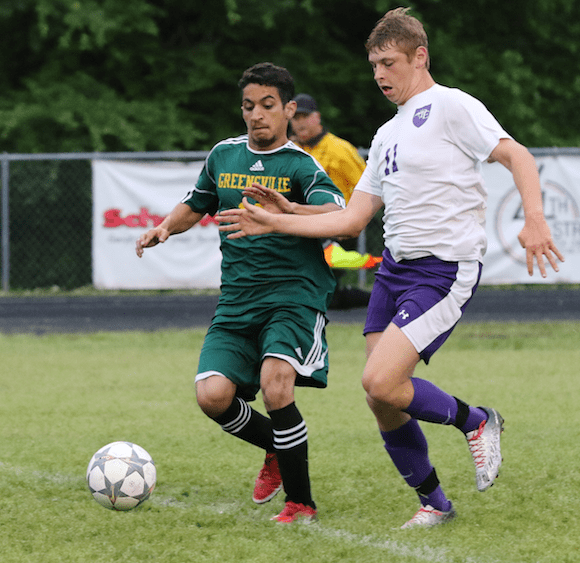 Prince Edward County High School’s varsity boys soccer team has made a habit of being in both the Quad Rivers Conference 34 championship game and the Region 2A East tournament, and the Eagles kept those traditions alive Wednesday evening.

The No. 2 seed in the conference tournament, the Eagles defeated visiting No. 3 Greensville County High School 8-2 in Wednesday’s semifinal to advance to Friday’s final against host and No. 1 seed Goochland High School.

This is the fifth consecutive year that Prince Edward has qualified for the regional tournament.

“It’s good to put Farmville on the map,” Eagles Head Coach Devin Pierce said of the accomplishment. “So, Prince Edward County, not many people have heard about it, but at least some of the kids that play on the other teams from Richmond and northern Virginia will say, ‘I’ve heard of it because we’ve played them in regionals.’ So, we’re kind of taking the small town and doing some big things for it.”

While the 8-2 score Wednesday seemed to indicate a solid performance by Prince Edward, Pierce had a mixed review.

“We just came out very flat, and that’s how it’s been the past four games,” he said, adding that he hopes the team has some momentum going into Friday.

The Eagles led 4-1 at halftime, but the lead did not stem primarily from team-centric play.

“We had a team talk at halftime, and we made a plan, and we stuck to it,” Pierce said. “We scored some good goals in the second half.”

Explaining what he meant by good goals, he described a scenario that involved getting the whole team involved, working the ball up from the back through each position group.

“It gets some fluidity in our  play; it’s not just a long ball,” he said. “But I think that’s one of the best times we’ve done that kind of scenario all year.”

During the regular season, the Eagles defeated Goochland 1-0 in overtime on the road March 23 and then fell 4-1 to the Bulldogs on May 16 at home, the 17-1 Eagles’ only loss this season.

“We are about the same skill-wise, and if we can stick to our formation and stick to our guns, we’ve just got to play with more heart,” Pierce said. “If we out-hustle them, if we try harder than them, then we’ll definitely win.”

Deitrich said, “We can come out with a win. We just have to play the soccer we know how to play.”

Two state runners-up on the diamond