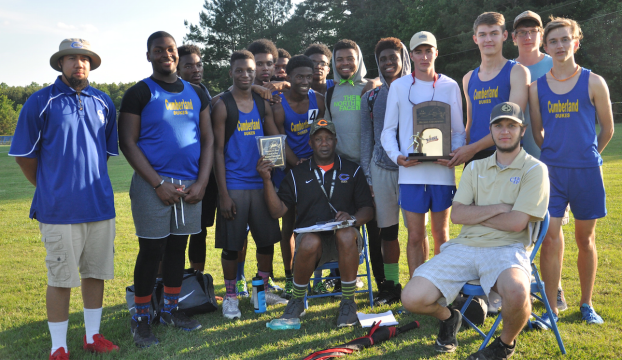 “They did what they had to do to get the job done and trying to carry as many people to states as possible,” Cumberland Head Coach Kenneth Jasey said of the Dukes. “And they did a superb job.”

The Dukes produced 72 points to place first out of 21 teams to generate scores, while Northumberland finished with 69 points.

Jasey said a strong performance in the boys 4×400-meter relay was even more important.

“We couldn’t finish worse than third,” he said. “If we finished anything past third, (the title) would have gone to Northumberland.”

Fulani, Rivera-Reed and seniors Jared Halvorsen and Matthew Bapties comprised the 4×800 team that won, finishing with an 8:51.30 time.

The overall regional team title earned by Cumberland’s varsity boys squad came even with a somewhat conservative approach by Jasey and his staff.

“We tried to minimize some of our events because we pulled Jared Halvorsen out of the 800, trying to save some of the legs, and Bapties only ran two races yesterday because he had that grueling soccer season,” Jasey said Saturday. “So, we tried to preserve it as best we could, and we just let the chips fall where they may. We always want to win, but if it takes sacrificing, losing somebody, we won’t go for it.”

Regarding the successful effort to claim the regional title, Jasey said, “Speaking for the seniors that lead it, that means a lot to them. They’ve been together the whole time and especially when they were much younger, smaller guys, and they’re just the backbone of our team. And being their senior year, again, that meant everything.”

The seniors on the MileStat.com roster for the boys team include Bapties, Jaylen Gilliam, Grubbs, Halvorsen, Desaun Jennings, Tyruss Sims and Trevis Trent.

Though none of the seniors placed first individually at regionals, they were still key to the team win by racking up top-six finishes, which resulted in points.

First place garners an individual or relay team 10 points, and Jasey said, “Those 10 points are good, but when you can still get 10 points out of an event with two guys, that helps equate with the other team that might have got that 10 points.”

In one instance of individual competition Friday, the Dukes earned the 10 points with one athlete, as Diming trimphed in the boys triple jump with a 41-foot 10 1/2-inch leap.

“This is his first year,” Jasey said. “He came through big time in that triple jump.”

The coach noted Diming had a busy day, which limited him in the boys high jump, but he was strong at the meet overall.

The coach also had praise for Foster.

Foster placed eighth in the boys triple jump with a mark more than four feet shorter than his seed distance. But in the boys 400-meter dash, Foster finished fifth with a time of 53.24 seconds, just behind Fulani.

“He was having a tough day, and he dug deep inside and got it done,” Jasey said of Foster.

Cumberland competes in the Virginia High School League Group 1A and 2A State Championships on Friday and Saturday at East Rockingham High School.

Prince Edward County High School’s varsity boys soccer team has made a habit of being in both the Quad Rivers... read more