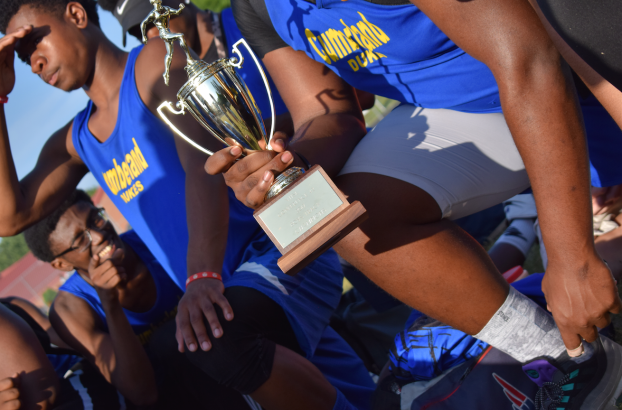 GLENDA GRUBBS While taking photos with their team’s Conference 42 Championship trophy, pictured are, from left, Cumberland High School sophomore Devon Rivera-Reed, peaking through at the camera, junior Keyshawn Diming, shielding his eyes from the sun, and senior Jaylen Gilliam, holding the trophy.

The Dukes won the Conference 42 Championship at Charles City High School on May 18, generating 135 points to place first out of seven teams to score points. Mathews High School came in second with 126 points.

Of the Dukes, Cumberland Head Coach Kenneth Jasey said, “I was very pleased with their performance overall. Not boasting — we expected to go in and do what we did. Mathews is a tough opponent, they are very tough down there, very good program, but we expected to be where we were — in contention to bring it home.”

He was also part of the Dukes 4×400-meter relay team that won with a time of three minutes, 38.81 seconds. The team also included sophomore Jalen Foster, senior Jared Halvorsen and sophomore Devon Rivera-Reed.

Among the seven girls teams to produce points at the Conference 42 meet, the Lady Dukes placed third with 106 points, generating two individual titles and one relay title.

Referring to the Fulanis, Jasey said, “Both of them, they are really a one-two brother-sister punch. They are awesome.”

Appomattox won with 126 points, and the Lady Knights were not far behind with 107.

Gough tied for first in the girls high jump, producing a 4-06 leap.

She was also part of the girls 4×100-meter relay team that came in first with a 51.73-second time. The rest of the team included sophomore Salma Muhammad, freshman Mia Seay and sophomore Jordan Booker.

Among the eight boys teams to produce points at the Conference 34 meet, Prince Edward placed fourth with 72 points, generating two individual titles and one relay title.

Moses gained a third title with his contribution to the Eagles 4×100-meter relay team, which won with a time of 43.81 seconds. Joining Moses on the team were sophomore J’Sean Dupuy and seniors Quantavis Nash and Brandon Scott.

Buckingham’s qualifying girls and boys competed in the Region 2A West Championships on Wednesday at Radford University.

“With rain, cold, vacation and an injury, we did not fare well today,” Lady Knights Head Coach Linda Amos said.

None of the Lady Knights are advancing to the Virginia High School League Group 1A and 2A State Championships at East Rockingham High School on June 2-3.

However, Buckingham will have several representatives at states from its boys team, including two triple-jumpers, senior Antonio Chambers and junior Will Davis, one sprinter, senior Rajheem Holman, who runs the 100 and 200, and the 4×100 relay team, which features, sophomore Kobe Hafley, Davis, Holman and Chambers.

Cumberland boys and girls will compete in the Region 1A East Championships at Sussex Central High School on Friday at 1:45 p.m.

Prince Edward boys and girls will compete in the Region 2A East Championships at East Rockingham on Friday at 1 p.m.

Knights bloom late but fall to Hawks in postseason

Buckingham County High School’s varsity baseball team produced a remarkable final week to its regular season, but it was not... read more