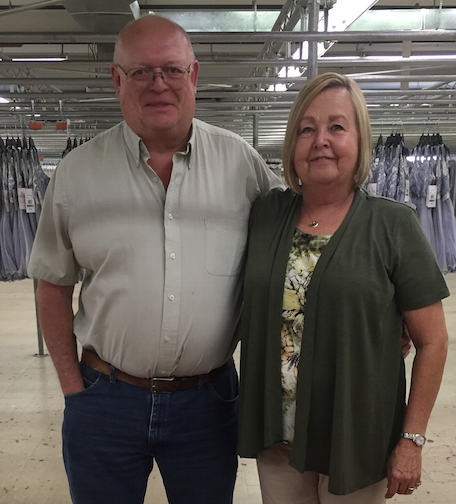 Pictured are George and Sandra Allen.

A retirement luncheon was held for George and Sandra Allen at the Star Dress Company in Amelia on April 27.

According to a press release, the couple worked for the company for more than 40 years, moving from place to place as the job required.

“George started working for Amelia Dress in Pamplin in 1970 as a cutting room assistant, and then fabric cutter,” officials said in the release. “He moved to Appomattox as a cutter with Amelia Dress when the Pamplin facility was destroyed by fire, subsequently becoming the Amelia Dress’ cutting room manager sometime before 1983.”

The release indicated at about the same time George started working there, Sandra started doing administrative work in the Appomattox facility, sorting and tagging cut work as well as handling the printing of the care labels for all of the sewing factories.

According to the release, in 1993 the Amelia sewing factory closed down and the cutting room with fabric and trim inventories was moved into that space.

“In 2004, the Amelia cutting room was repurposed to a garment finishing facility, and once again, George and Sandra had to take the cutting room with the fabric and trim inventories on the road, this time to a building in Farmville,” officials said. “A good deal of work went into the creation of the workspace, of which George designed and got built.”

The release stated that in 2006 the decision was made to close Star’s Farmville domestic cutting operation, which had been supplying cut goods and trim to the Central American factories, at which time George and Sandra facilitated the shutdown of the cutting room and the transfer of the fabric and trim to a Central American supplier of Star Childrens.

“After the Farmville facility was closed, George changed positions with Star and became the finished goods warehouse manager,” officials said.