She was born on June 14, 1925 to the late H. Johnson Hubbard and Louise B. Hubbard. She is preceded in death by her parents, her brother H.J. Hubbard and his wife Dorothy and her brother Robert A. “Bud” Hubbard. 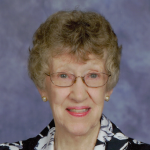 She is survived by her daughter, Constance G. Kingsbury (Michael), grandchildren; Scot F. Garrett (Dimple) and Anne H. Garrett. Also surviving her are her great grandchildren; Cindy, Sarah, Sam; sister-in-law, Ann H. Cheatham; as well as many nieces, nephews and their families.

Connie had a long career in the business world. She graduated from Longwood College in 1945. She began work at Longwood on July 1, 1956. She was secretary to Dr. Edgar Johnson, head of the Audio Visual Dept. Then she transferred to the Purchasing Dept. in October 1965.

She retired from Longwood College March 1, 1986 after 30 years of service to the state of Virginia.

Connie was a founding member and staunch supporter of Heritage Baptist Church. She worked on many committees and headed several.

Connie will be dearly missed by her family and scores of friends. A special heartfelt thank you to the staff of the Watson Unit at The Woodland for their loving care.

Memorial contributions may be made to the Longwood Foundation or a charity of your choice.

A memorial service was held on Sunday, May 28, 2017 at Heritage Baptist Church in Farmville.

Barbara Capece Humphreys of King of Prussia, PA died on Monday, May 22, 2017 from injuries she sustained in a... read more