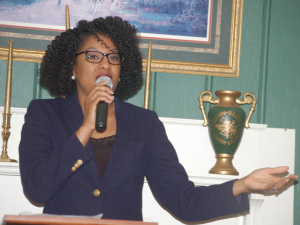 “First, you have to decide once a juvenile has committed a crime, what do we want to do? Sometimes we do nothing in terms of the criminal justice system,” Clark said. “Often times we go through the diversion process … After the diversion if that does not work, which is the informal route of dealing with someone, then there may be the decision to do petitions.”

Clark said a petition when dealing with minors is the same concept as a warrant for adults.

Graves said the majority of problems seen in schools come from social media.

“I think I’ve had a couple petty (larcenies) — small stuff — headphones that have been returned, but as a whole I’ve found out the major problem, as far as the kids, I’ve found out I’ve had to go down there and do a diversion on a couple kids because you don’t want to see them get like that,” Graves said.

He said he has an open door-policy with students.

Patterson said when minors come through court services, staff usually gives them conditions and terms that, if abided by, will result in the charges being dismissed.

She said during the time she works with juveniles when they’re on parole, they’re under her supervision where they’re expected to adhere by rules issued by the judge or the probation officer.

“The Department of Juvenile Justice (DJJ) utilizes the Youth Assessment Screening Instrument, also known as the YASI, to assist risk, needs and protect the factors of the youth,” Patterson said. “This tool determines whether the juvenile will be a low, moderate or high risk probation or parole case.”

She said after being placed on probation, a social history is completed on juveniles to help probation officers gain knowledge of the child to understand what went on in their past and what’s going on in their current lifestyles to also understand the family’s needs.

Johnson said the Juvenile Detention Center gets calls daily from parents who ask for their children to come stay the weekend when they don’t do their chores.

“The only way a child can come to me is with a court order,” Johnson said.

She said the license for the detention center allows them to accept delinquents as young as 8 years old and as old as 17.

“Sometimes it’s real difficult to keep those real young ones separated from the older ones, but we do everything we can from having that happening,” Johnson said. “A lot of times our younger ones are just as bad as the old ones.”

She described school and group therapy being a major part of the time spent in the center.

“The department is basically in charge of supervising any kid who gets in trouble,” Director of Juvenile Justice Andrew Block said. “It could be they come to the front door and we divert the case, or we say, ‘There’s not enough here to do it,’ but on any given day across the whole state of Virginia, we have about 4,500 who are on probation, another 200 who are on parole, another few hundred who are on some kind of supervised diversion and then, as of this morning, a total of 340 who’ve been committed to state custody, and of that number, only 230 who are in a state-operated facility.”

He said the vast majority of children the state works with are kids who remain in the community.

Block described reforms the state has been undertaking, noting the shutting down of detention centers in order to reinvest money into programs that could better help delinquents.