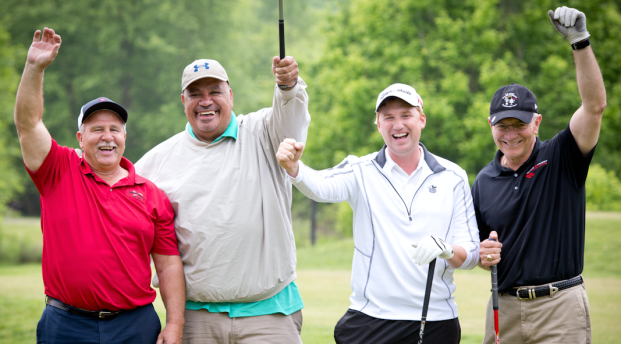 The 11th Annual Farmville Area Chamber-Centra Southside Golf Classic was held May 11 at The Manor Golf Club. According to a press release, the rain-or-shine event, with a record turnout of 28 foursomes, included a day of golf and special events.

“It rained a little when we were setting up, but after that it didn’t rain until after the tournament was over,” Chamber Marketing Director Jennifer Kinne said in a press release. “It was an amazing day.”

Chamber Executive Director Joy Stump was more than pleased that the weather cooperated. “This tournament is the chamber’s big fundraiser of the year,” she said.

According to the release, many businesses participated in this tournament that offers opportunities to make valuable connections.

“This year’s special events include a ‘Fun Hole’ sponsored by (The) Fishin’ Pig and a ‘Chipping Contest’ sponsored by Navona Hart Real Living Cornerstone,” Stump said.

The release cited that for any golfer fortunate enough to hit a hole-in-one, an even bigger prize was offered by Haley of Farmville — a 2017 Toyota Corolla.

“This year no one claimed the prize,” officials said. “Another popular event held at the conclusion of the tournament is the helicopter golf ball drop.”

The release cited that participants purchased advance tickets corresponding to 250 numbered golf balls. When the helicopter dropped the balls, the ball falling closest to the hole won.

“We were debating whether to call the helicopter and cancel because of the weather,” Kinne said. “About that time the helicopter showed up, so everything went on as scheduled.”

This year’s winner of the $500 ball drop prize was Andy Bridge.

The number of sponsorships by businesses added to the community feel of the tournament.

Stump, chairing the event for a second time, added another component to the golf event — a donation to a community organization. This year’s recipient is the Heart of Virginia Free Clinic.

“Whenever the chamber does a fundraiser, I feel that we should also give back to the community,” she said.

Adding to the day’s camaraderie was an after-tournament reception hosted by The Fishin’ Pig.

“Everybody comes, and we have a great time,” Stump said. “I love to see people making connections and having a great time too.”

According to the release, the Farmville Area Chamber of Commerce exists to improve the quality of life of those living and doing business in the community by working in partnership with its members and government.

“The golf tournament is one of many benefits included with membership in the chamber,” officials said.