Barbara Capece Humphreys of King of Prussia, PA died on Monday, May 22, 2017 from injuries she sustained in a car accident four days prior.  Barbara was the wife of Neil J. Humphreys of Farmville, VA; her husband was also involved in the accident and remains hospitalized.  Barbara was born in Lancaster, PA and raised in Freeland, PA; she is the daughter of the late Salvatore Capece and Anna Vollmer. Along with her parents she was preceded in death by her sister Caroline Pleva and her brother Edmund Capece; her brother also recently passed away on May 3, 2017. 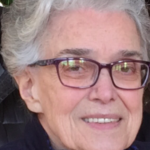 Barbara graduated from Freeland High School and Drexel University and she taught typing and shorthand at the high school level before starting her family in 1962.  She was an active member of The Church of Jesus Christ of Latter-Day Saints since 1973 and generously volunteered her time and resources to countless people and organizations over the years.  Over the course of their marriage, Barbara and Neil lived in Philadelphia, PA, Richmond, VA, Ruston, LA and Farmville, VA as well as Avalon and Stone Harbor, NJ where they were the owners of Springer’s Homemade Ice Cream for 42 years.  She was a beloved boss and friend to many employees and customers and she leaves an indelible mark on the community and all those that knew and worked with her.

Relatives and friends may call on Wednesday, May 31, 2017 from 9-11 AM at The Church of Jesus Christ of Latter-Day Saints at 2530 Stinson Lane, Norristown, PA.  A funeral service will be held at 11 AM and interment will follow at Philadelphia Memorial Park, Malvern, PA.

In lieu of flowers, memorial contributions may be made in Barbara’s memory to your local Volunteers in Medicine chapter or Saint Jude’s Children’s Hospital (www.stjude.org/Donate).