A Cumberland County woman was arrested and charged recently for stealing lottery tickets stemming from an incident in March at the place of her employment. 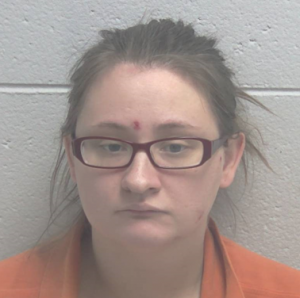 Deputy Ryan Bates began investigating the incidents following a call from the manager of The Market Express #4 at 1611 Anderson Hwy. in Cumberland on March 16 at 8:30 p.m. to investigate video surveillance footage.

Bates said the footage shows an employee of the store stealing lottery scratch tickets, putting them in a bag. Bates said the incidents took place while Atkinson was working.

Atkinson was arrested at the Cumberland County Sheriff’s Office after coming into the office for an interview regarding the stolen lottery tickets.

Atkinson was previously arrested March 20 for sale and distribution of marijuana and stealing from the same gas station on Anderson Highway.

Atkinson had also been indicted by the Cumberland County Circuit Court on April 25 for alleged extortion in writing, bomb/burn threat, profane language over public airway and annoying ringing over phone, stemming from incidents in November.

A trial is scheduled for July 11 in circuit court.