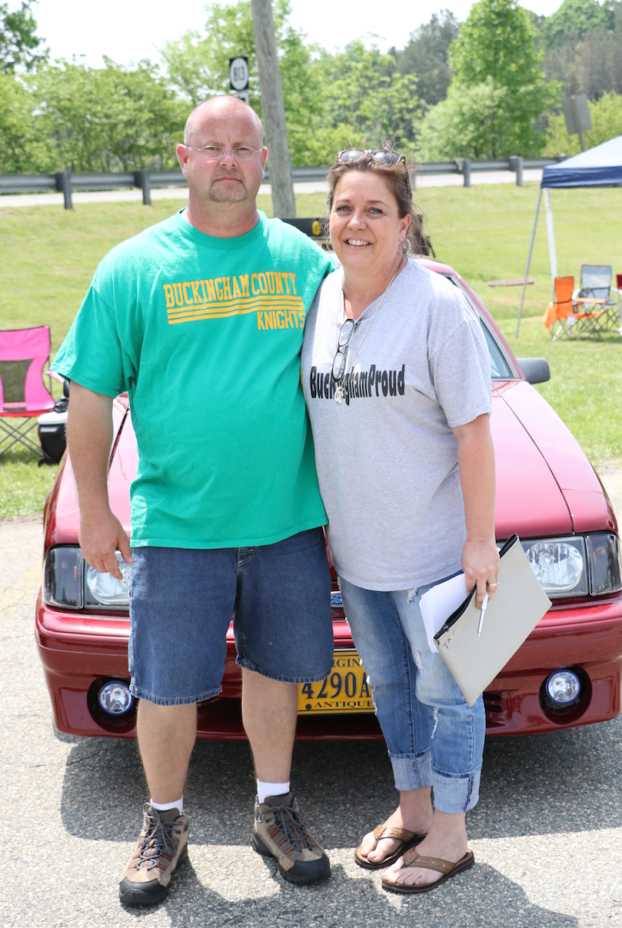 Travis Toney, left, and Scotty Edwards, are the two of the organizers of the fourth annual “Let’s Fight Cancer Together” car and bike show. They stand in front of Toney’s 1988 Ford Mustang GT.

A driven fight against cancer

A gathering of remarkable cars and motorcycles drew a large crowd of people to Teresa’s Place at Sprouse’s Corner for the fourth annual “Let’s Fight Cancer Together” car and bike show Saturday afternoon.

“It’s a good cause,” said Travis Toney, one of the organizers of the event.

He explained that it was a group of Buckingham County High School (BCHS) graduates — including Jamie Bryant, Scotty Edwards, Jennifer Shumaker and himself — that first put the show together.

“We had a classmate that passed away from cancer, and we wanted to do something and donate the money to the Relay For Life, so me and (Edwards) and (Bryant) and a few others just decided we’d do a car show, and we thought it was going to be a one-time thing, and it’s gotten a little bit bigger every year.”

Toney said that each year, the names of different people who have passed away from cancer are featured at the show, including some who did not go to high school in Buckingham County.

He has been impressed from the start by how big the event has been.

“The girls had never done a car show before, and I told them, I said, the first one, ‘If we have 30 cars, it’s going to be a big show for Buckingham.’ We had 63 the first year.”

The second year featured 75 vehicles registered, and last year there were 83, he said.

Edwards noted Monday that while there ended up being only 61 entries this year, the event broke new ground in fundraising, bringing in $1,770 for Relay For Life.

“This is the most we’ve raised so far in four years of doing this event,” Edwards said after pointing out that the new high beat the previous one by $200.

There are also best in show categories.

“In order to vote, you’ve got to put a car in it,” Toney said. “We just decided, hey, if the people own a car and they put a car in the show, they should know something about them.”

He said that every bit of the money raised from the event goes to the Relay For Life, and that includes entrance fees, the 50/50 raffle and any donations people want to make.

Food pantries are gearing up

Happy birthday wishes go out this week to the following: Carol Luke, of Cumberland, Friday; Claire Landis, of Farmville, and... read more