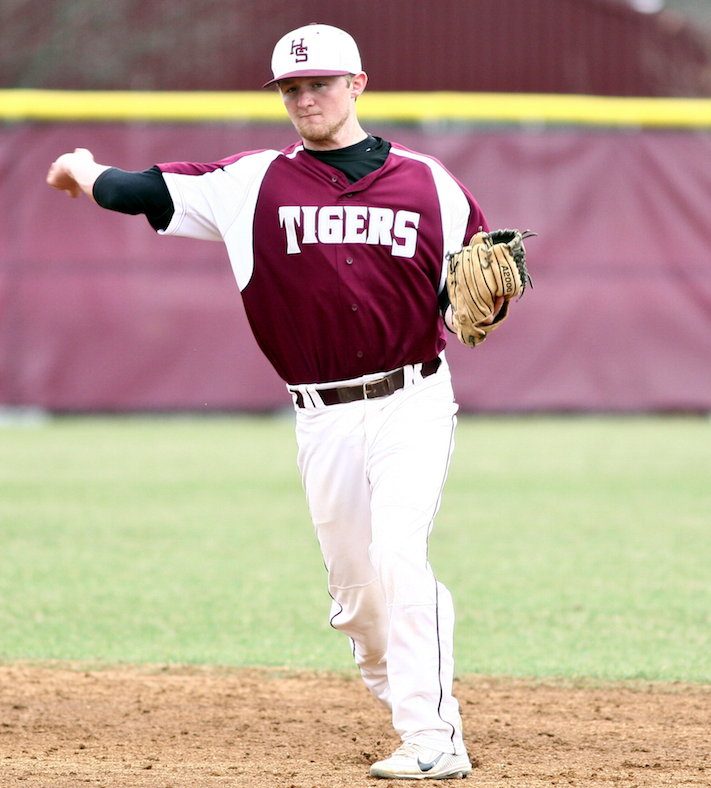 HAMPDEN-SYDNEY ATHLETICS Hampden-Sydney College sophomore Jayson Maitland has been a key contributor for the Tigers this season and is tied for the team lead with 18 RBIs.

Hampden-Sydney College’s (H-SC) baseball team lost a lot of key players on graduation day last year, and the team’s 2017 roster is dominated by underclassmen, but nevertheless, the Tigers are still a force to be reckoned with.

H-SC went 6-2 in February to start the season, including opening the year with five straight wins.

“It definitely took me by surprise,” Kinne said, “and we still have a lot of growing to do, but they’ve grown fast, and they’ve played hard, so we beat a few good teams in there and did really well.”

Getting specific about what has driven the Tigers’ 2017 success, the coach said, “Our pitching has definitely done more than expected. There’s a lot of young guys on the mound, and they’ve really competed.”

In H-SC’s most recent victory, a 3-2 defeat of host Roanoke College on Saturday, freshman pitcher Chase Mayberry earned the win on the mound, improving to 4-0 this season, while freshman Jonathan Triesler earned his first save.

Kinne gave praise to Mayberry, Butler and Triesler as standouts.

“Early in the year, we were getting some really big stuff from Jayson Maitland, a sophomore shortstop,” Kinne said, also highlighting junior Brian Goodwyn.

Maitland and Goodwyn are tied for the team lead in RBIs with 18 apiece. Goodwyn leads the team with 28 hits, and Maitland is tied for second with sophomore Tyler Blevins, as each of them have 26.

The coach said junior catcher Devin Daugherty has done quite well. He has a batting average of .390, one of the best on the team.

Kinne said it is hard to predict how the 2017 Tigers will perform overall because the presence of such youth on the team can translate to inconsistency.

There is definitely room for growth, too.

“On the mound, we’ve walked way too many people,” Kinne said. “We’ve really got to work on that. And over the past few weeks, our offense is starting to sputter, so we’ve got to get back to hitting our pitches and not trying to do too much.”

The Tigers host Virginia Wesleyan College on Wednesday at 4 p.m. and visit Bridgewater College on Saturday for a doubleheader starting at noon.