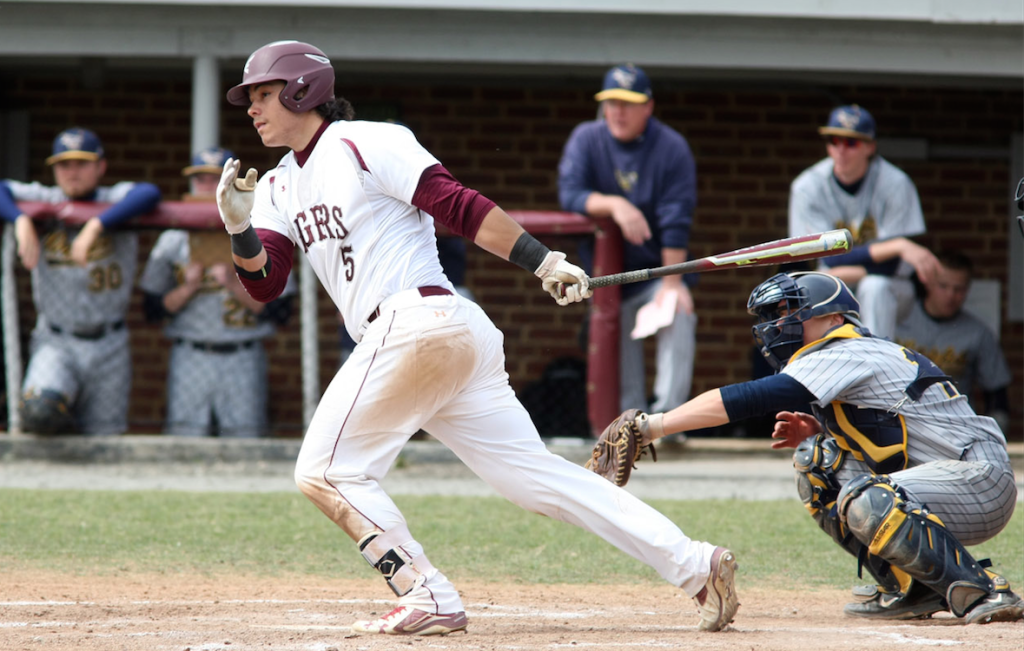 HAMPDEN-SYDNEY COLLEGE ATHLETICS Hampden-Sydney College junior Devin Daugherty used his bat to help his team get a 15-7 win Saturday against the top-ranked NCAA Division III squad in the nation.

Hampden-Sydney College’s (H-SC) young baseball team has shown surprising strength this year, and Saturday, it confirmed again that it can play with the best of its NCAA Division III peers.

In a doubleheader Saturday against host and nationally top-ranked Shenandoah University, the Tigers won game one 15-7 and narrowly lost game two, 3-2.

“We hit really well in game one, and I think the strike zone was a little tighter than normal, so it forced their pitcher to kind of bring the ball to us, and we did a nice job, when they made mistakes, of hitting the baseball.”

The Tigers’ bats led to the first loss of the season for Hornets freshman pitcher Gerard DePhillips (6-1).

“Brian Goodwyn had just a great game one,” said Kinne, highlighting H-SC offensive standouts. “He was 3-for-5 with a home run, and they were definitely pitching around him in big spots. In game two, he had an at-bat late; they didn’t even throw him a strike. In fact, he drew two walks in game two late in the game. So, he had a huge day for us.”

In game one, Tigers junior Devin Daugherty was 2-for-4.

“He had a double and a big home run that knocked DePhillips out of the game,” Kinne said. “That was the back-breaker for them.”

The coach explained that for game two, the home plate umpire and the field umpire switched places. He said that with this switch Saturday came a significant change in the size of the strike zone.

“In game two, the zone was bigger, so (the opposing pitcher) had more room for error, and that made it a lot harder on us,” Kinne said.

Nevertheless, it was a 3-2 game, with both teams scoring runs as a result of the other’s defensive error.

Reviewing the defensive side of H-SC’s day, Kinne said, “We did OK on the mound. We weren’t at our best, but we did pretty well. Defensively, we made, actually, several mistakes. It’s a hard place to play. The field plays really tough. … But all in all, going to Shenandoah and getting a split isn’t a bad thing.”

H-SC used two freshmen on the mound in game one — Chase Mayberry and Jonathan Triesler, the latter of whom earned the win to improve to 4-2.

Kinne said his team’s performance against the No. 1 Hornets will help build its confidence and could give it a tie-breaker over some teams in the Old Dominion Athletic Conference.

H-SC (18-14) presses on for now without senior Dustin Wiles, due to a pulled hamstring, and junior Moe Gothe, due to a facial injury.