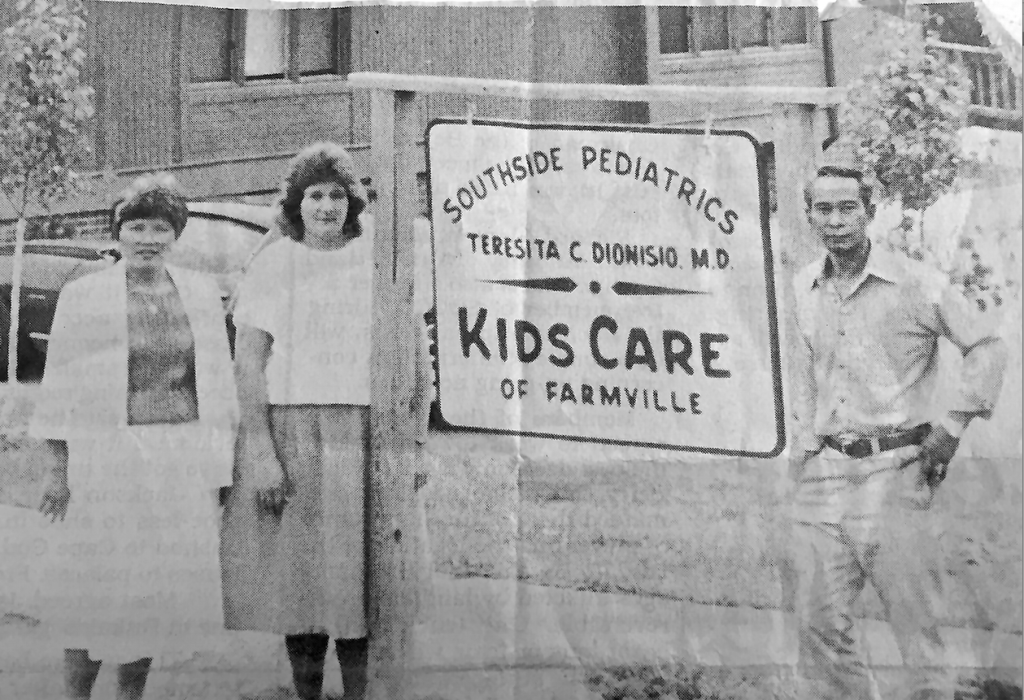 They grew up in the same small town in the Philippines and both achieved success, she as a practicing physician and he as a storekeeper in the United States Navy.

After 22 years of service in California, Subic Bay, the Philippines and Virginia for him and nearly five years of additional training for her in the United States, they came to another small town, Farmville, and succeeded a second time — to the great benefit of this community.

In 1983, Dr. Teresita and David Dionisio came from Norfolk to establish Southside Pediatrics with $5,000 and little knowledge of the business side of medicine.

Parker Terry, of Putney Mechanical, offered space in the house on Buffalo Street. His father had been a Farmville doctor for years. The administrator of Southside Community Hospital, J. B. Towler, allowed Dr. Dionisio to furnish her office with some surplus hospital furniture. He also assured her she would do just fine here.

Unfamiliar with billing practices, the Dionisios were helped by another physician, Dr. William Coppage, who explained costs for such things as patient visits, procedures and tests. David learned to manage the books as Teresita’s practice grew.

Earlier, David had been stationed in Norfolk while Teresita was working in West Virginia, where they were married in 1976. From 1979-83, Teresita finished her residency in pediatrics at Children’s Hospital of The King’s Daughters in Norfolk.

From the first, her reasons for coming to America involved family. Dr. Dionisio’s father and two of her siblings already lived in the United States in 1973.

In 1983, Dr. Edward I. Gordon was the only pediatrician in Farmville, and an advertisement calling for a second doctor reached the Dionisios in Norfolk. Her arrival here was a godsend to new families coming to the area; but it was not easy to start a practice, as she says, “from scratch.”

There had been no guarantee from the hospital when she made the decision to come to Farmville. She even turned down a second offer from Norfolk because she felt she had made a commitment to this community.

The $5,000 she brought with her was a loan she would have to pay back. And she had no additional support, other than the good will of the town and the experience and effort she and David brought to the venture.

Even as the Dionisios were working long hours in their new business, they began raising two children, a son, Donnie, now an officer in the U.S. Air Force, and daughter, Theresa, a family practice physician who is planning to join her practice in the future.

At one point, seeing limited daycare facilities in Prince Edward County, they invited a friend, Sophia Arneho to Farmville and together they established Kids Care of Farmville.

Recalling those days of being a stranger in a new place, Dr. Dionisio says, “I felt welcomed as a professional and a citizen.”

Asked recently if she was ready to retire, Dr. Dionisio flashed a characteristic smile and laughed. “Not at all!” she said. That answer is good for all of us.

Dr. Michael Lund can be reached at lundmc@longwood.edu.