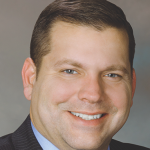 WASHINGTON D.C. — Joined by other representatives from Virginia, U.S. Rep. Tom Garrett, R-Buckingham, took to the floor of the U.S. House of Representatives recently to honor the two children killed in a tractor-trailer accident on Thursday, March 30.

Reiterating his remarks from the House floor, Garrett said in a press release, “I cannot fathom the pain of these families. Two beautiful children were taken from this earth way too soon and nothing can replace them. I offer my prayers and most heartfelt sorrow for your loss.”

Garrett attended the memorial service for the two held at Buckingham County High School, presenting each family with a flag flown over the U.S. Capitol in memory of Bartee and Perez.

According to Virginia State Police spokeswoman Corinne Geller, the children, Tori Perez, 5, and Jaiden Bartee, 6, were struck by the tractor-trailer on U.S. Route 15 when attempting to cross the road as their school bus approached.