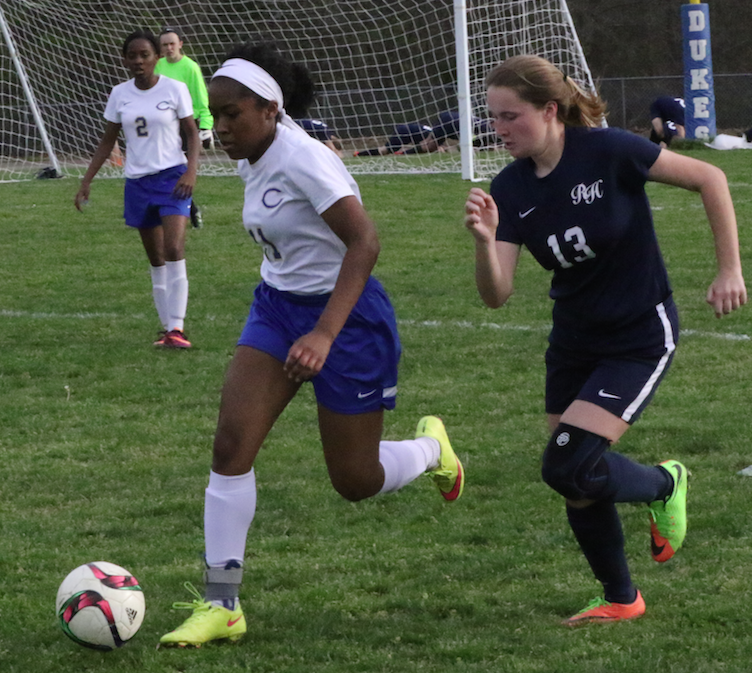 Cumberland High School’s varsity girls soccer team has not had numbers, health or much experience on its side this season, but it is making strides nonetheless.

“In my opinion, we’re ahead of where we ended last year, which was one of my goals starting (the) season,” said Lady Dukes Head Coach Heather Sutton.

Cumberland holds a 1-4-1 record so far this season,  and it finished last year at 2-14, falling in the first round of the conference tournament to Goochland High School after winning a playoff game to reach the tourney.

“If we had a healthy team right now, I think we’d be ahead of where we’re at now,” Sutton said.

Out since the first week of the season with an ankle injury has been senior center defender Katey Hougland, though Sutton hopes to have her back soon.

The coach said she has three key seniors on the roster this season, and the rest of her players are underclassmen, so “a good mix of some returners and then some new faces.”

Sutton said Trieble and Kaylah Paras, who is back this year, “definitely held it together in the center for us.”

The development of the players comprising the 2017 Lady Dukes should progress at a good pace given the effort Sutton said they are demonstrating. She praised them particularly in light of the fact many of them have never played soccer until high school.

The 15 girls on the roster, including Hougland, face the challenge of playing not only more-experienced opponents but also teams culled from larger schools.  Sutton said because of lower participation numbers in girls soccer, Virginia High School League Group 2A teams — like powerhouse Goochland — play against Group 1A teams in the postseason.

But the coach said her players have set big goals this year, including avoiding defeat by slaughter rule, except for against Goochland.

“So far, they’ve held to that,” Sutton said.

As for the postseason, she said, “I’d really like them to make it to the second round of the tournament, but that’s hoping that we don’t face Goochland (in) the first round.”

Leading the Lady Dukes this year is Paras, a senior, who has extensive playing experience.

“She’s just a very confident, composed player, and she helps foster that in her teammates even though they’re at a different skillset level,” Sutton said.

The coach also highlighted senior Allison Gilbert, a veteran softball player who had not played soccer since grade school but has been outstanding as a goalkeeper, even notching several assists from the position.