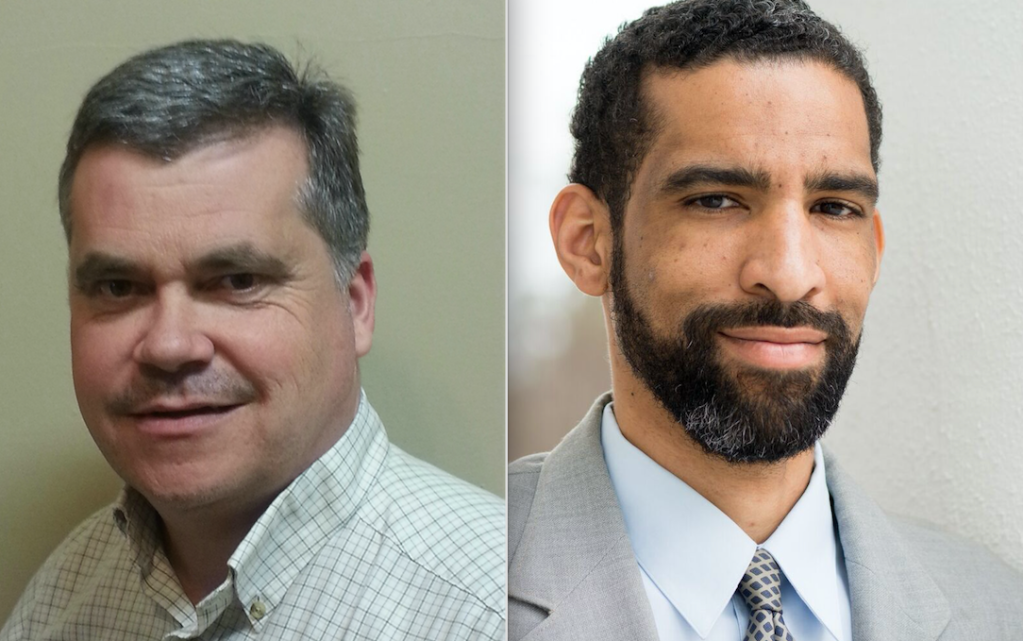 James Edmunds, left, and Jamaal Johnston will face off in November for the 60th House District seat in the Virginia General Assembly.

Jamaal Johnston, of Meherrin, is running as a Democrat against Edmunds, who was first elected in 2008 to the House.

According to a press release, Johnston is the owner of White Hawk Security International Inc., a security management company that specializes in security consulting and training for small and medium-sized businesses.

“Johnston also works as an evening transportation dispatcher for Prince Edward County Public Schools,” he said in his press release.

The 60th House District includes Prince Edward, Charlotte and Halifax counties, and encompasses a portion of Campbell. The election is in November.

“For the past eight years, I have had the honor of representing the 60th District in the Virginia House of Delegates,” Edmunds said in his release announcing his re-election bid. “I remain committed to the values and traditions we hold so dear here in rural Southern Virginia. As our state continues to grow, rural influence continues to diminish. During my term, I have forged respectful relationships with legislators in the more urban areas of our state, which allows me to more effectively represent our area and to work for the best solutions possible in any given circumstance.”

“Public service was always something that was in the back of my mind, and after this last election, I realized it is time for regular, working people to step up and represent other regular, working people,” Johnston said in his release. “As the owner of a local small business, I understand the challenges of starting and growing a small business in a rural area. I am committed to helping others start and grow their small businesses so that we can change the current economic landscape of the 60th District.”

Johnston said he’s in the process of starting a nonprofit organization called The 500K Club, an organization dedicated to mentoring students from ninth grade through college graduation. He said the mission of the club is to help their mentees complete college and become professionals who are able and motivated to give back to their communities.

“Johnston graduated from Prince Edward County High School in 1997. In 2007, he decided to go back to school and began working on an associates degree at Southside (Virginia) Community College. He switched to an online program so that he could continue working full-time to care for his family,” according to his press release.

Johnston graduated with associate of arts and bachelor of arts degrees from Strayer University before going on to earn his masters of business administration through Walden University. “He is currently pursuing his doctorate degree in project management from Walden University,” according to his press release.

Johnston and his wife, Zakiyyah, have four children, according to the release.

“My service on the agriculture, natural resources and conservation committee; the health, welfare and institutions committee; and the militia, police and public safety committee gives me the opportunity to protect our interests in these three critical areas,” Edmunds said in his release. “In addition, as chairman of the natural resources sub-committee of agriculture, I am in a position to have a direct influence on issues that affect our rural heritage. I was honored this year to be asked to chair the House Sportsman’s Caucus and am excited about the potential for expanding awareness of our time-honored outdoor traditions.”

Edmunds said his service on the Virginia Tobacco Indemnification and Revitalization Commission “allows me the opportunity to help chart the course of future development in the tobacco footprint across Virginia.”

In his release, Edmunds noted his experience on the board of directors for the Southern Virginia Higher Education Center.

“Honest effective leadership, as well as fiscal responsibility, stewardship of taxpayer money and continued workforce training will remain my highest priorities,” Edmunds said. “We have made great strides in the education of our children to help prepare them for a 21st century workforce and in economic and tourism development, but much is left to be done. Effective constituent service and an open-door policy will continue to be priorities of my office.”

In Edmunds’ release, Republican Del. Kirk Cox, who’s set to succeed retiring Del. William Howell as speaker of the House of Delegates, said Edmunds “has been a great advocate for the 60th District during his time in elected office … We need James in the House of Delegates as a respected voice for Southside Virginia and as an advocate for the conservative principles of limited government, personal responsibility and individual liberties.”