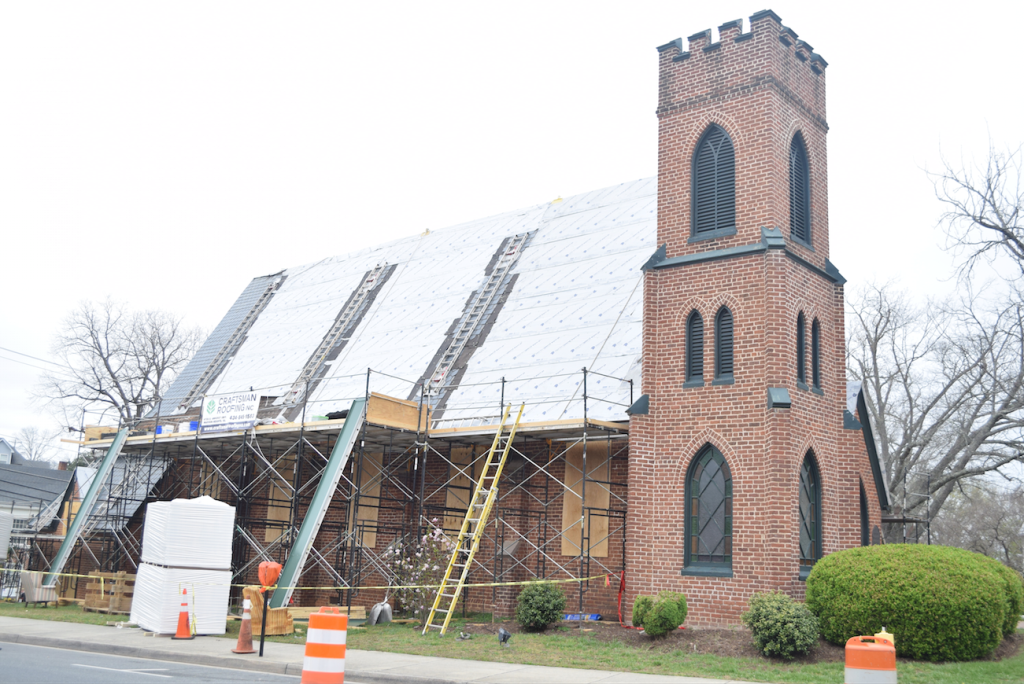 BRIAN KLINGENFUS | HERALD The project at the church is expected to take between six and eight weeks, provided no further damage or issues are discovered.

Q: What’s going on with the construction work at Johns Memorial Episcopal Church on High Street?

The church, located at 400 High St., was built in 1881. The shingles, made of slate, and the nails are original to the building.

After more than 130 years of weather and other damage, church leaders say the shingles are still in good shape, but the nails holding the slate down are beginning to rust and fail, causing shingles to fall off. The failing nails, leaders say, exposes the wood underneath, causing water damage and leaks. 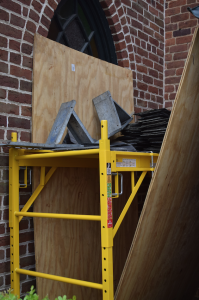 BRIAN KLINGENFUS | HERALD
The church hired Jamerson-Lewis Construction as the contractor for the roof work. Crews will remove the slate from the roof, replace any damaged wood, lay down a waterproof membrane over the wood, place five inches of insulation and a layer of plywood down and place a final waterproof membrane on top of the plywood. The shingles will then be placed back on the roof.

To fix the roof, which was seeing shingles falling off at a rate of 40-50 per year, according to Junior Warden Charlotte Greene, the church took what she called the “Band-Aid approach,” fixing each shingle as it fell.

After realizing the problem was not going to improve, the church began planning for a major project.

“It was really important for us to keep the original slate as much as possible,” said Greene. “It’s historical; the church is Civil War-era and uses Buckingham slate. We didn’t want just anybody to do the work because we wanted to save the slate.”

“The slate has been there so long; it’s a part of Farmville’s heart and history,” church member Jimmy Gantt said. “It’s very expensive initially, but you don’t have to come back and deal with it in another 15, 20, 25 years. I’m hoping for another 150 years out of this slate.”

The church has chosen to partner with Jamerson-Lewis Construction on the work. Kevin O’Brien, the project manager for the job, said the slate on the roof is meant to last around 200 years.

“It’s been up there over 100 years as it is … Buckingham is probably one of the better slates,” said O’Brien. “The slate we put on top of the Farmville (Train Station) is Vermont Green slate. That’s a lot softer than the Buckingham slate.”

Greene said construction crews will remove the slate from the roof and replace any of the wood underneath that may be damaged. The wood will then be covered with a waterproof membrane. Five inches of insulation, a layer of plywood and another waterproof membrane will be installed and the slate shingles will be placed back on top of the membrane.

The work began March 20 and is expected to take six to eight weeks, provided no further damage or issues are discovered. The project is estimated to cost between $250,000 and $300,000.

Greene said church services are being held in the church’s Parish Hall as construction has brought debris into the main building.

Services are held at 8 a.m. and 10:30 a.m. on Sundays and are expected to be held in the Parish Hall for at least the next month, “until we feel like they’re done making a mess,” Greene laughed.