Compelling progress on the diamond 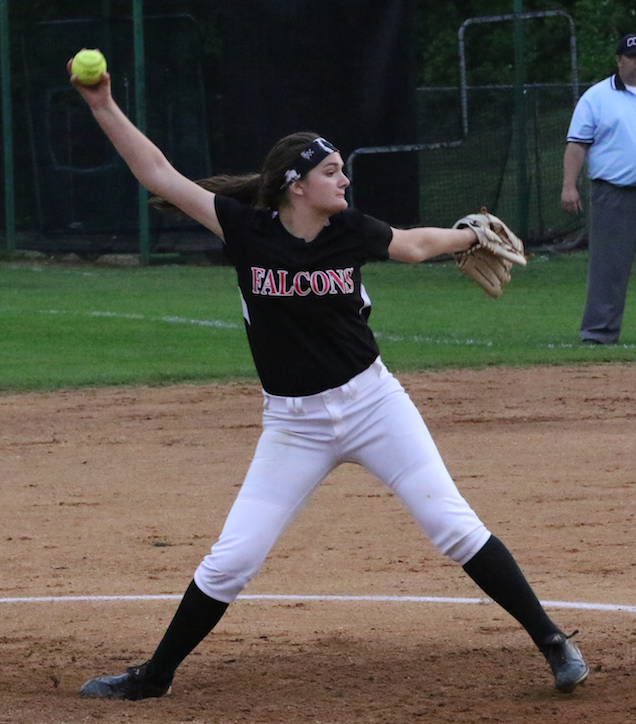 TITUS MOHLER | HERALD Fuqua School sophomore Regan Ware prepares to release a pitch during a rain-delayed home game April 20. Ware’s skills in the circle and at the plate have helped the Falcons record a 10-3 overall record thus far this season.

Fuqua School’s varsity softball team has created good reason for fans to be excited this season.

Entering Friday’s home game, the Lady Falcons hold a 10-3 overall record and are ranked No. 1 in the state at the Virginia Independent Schools Athletic Association (VISAA) Division III level according to the latest state poll.

Though they lost to a talented Central Virginia Home School team last week, the Lady Falcons had piled up eight consecutive wins prior to that.

“I think I’m pleased with the progress we’ve made,” Fuqua Head Coach Mike Ford said. “I still don’t feel like we’re hitting on all cylinders yet, but we hope to get there in the next two to three weeks.”

Much has gone right for his team, though, and he gave some details on that.

“I feel like the pitching has been exceptional,” he said. “Regan Ware has done a majority of it, but … Sierra Wharam and Hannah-Gray Schmidt (have) also pitched, and I feel like they’ve done a great job.”

Ford noted that on offense, the team has had a variety of contributors.

“We seem to have different people stepping up as the year has gone on,” he said. “That’s been a nice asset for us.”

When asked to hone in on who his best hitters have been, he said, “There’s been a pile of them.”

He did not claim to provide a complete list, but highlighted several players, starting with junior Alexa Marzloff.

“I think she was 12-for-16 through one stretch,” Ford said. “Mary Grace Amos had a stretch … three or four, five games in a row where she’s just knocking the cover off of it. Regan’s been pretty consistent with the bat.”

“I haven’t counted, but I think five or six girls have hit home runs,” he said. “It’s been a lot of fun. They’re doing well.”

Through 13 games, the Lady Falcons have outscored their opponents 118-51.

Ford still sees room for improvement, though, as Fuqua’s run output has varied significantly at times.

“I’m hoping the bats get more consistent, I mean top to bottom in the lineup,” he said.

He added that there is still some tweaking to be done in the field.

This season, “we’ve gone through a lot of injury,” Ford said.

This has required moving players around to different positions, and he said the girls have responded well.

Senior Katie Haney has been out for the season due to a knee injury, but Ford noted that Virginia Haney was out for a couple weeks with a concussion, Bickford missed a game due to pink eye and Ware’s knee is bothering her, which would have held her out of Wednesday’s game had it not been called off.

Ford is aiming to find the right mix of players to put on the field together, ideally with a fully healthy group to select from.

“We want to try to get it figured out where we have the best nine on the field, and that could change depending on what team we’re playing and the style the other team plays,” he said.

The injuries have given the Lady Falcons an opportunity to show some flexibility and tenacity, as have some close games, including a 7-5 road victory over Southampton Academy on April 18.

“For the most part, the team has a nice resilience in that we get down and we battle back,” he said. “I guess they’re learning to get a little stronger mentally, which they need to do, because they’ve got talent. And just different parts of the game got to come together, but that’s part of having a team and evolving as a team.”

Southampton occupied the top VISAA Division III spot in the first two state polls of the season, but Fuqua has held that spot as of April 18.

“It feels good, and we’re appreciative and grateful,” Ford said, but he added that his team’s focus is to close out the season strong.