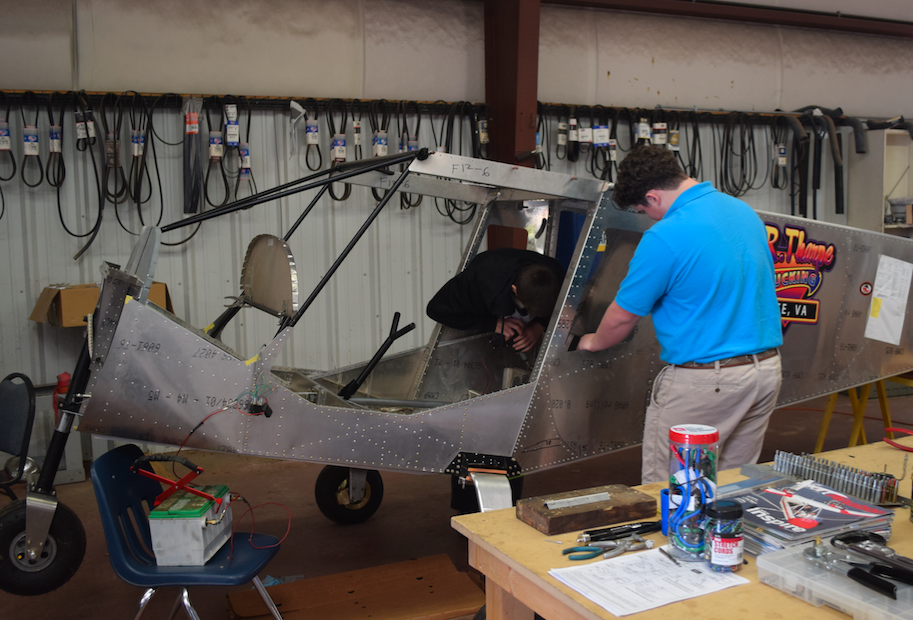 Construction continues on an airplane being constructed at Fuqua School by students in the school’s aviation class.

The aviation course offers classroom instruction on airplanes and flight, as well as hands-on experience and instruction by allowing students the opportunity to see and assist in building an airplane from a kit with professional supervision.

“I think it’s great. The hands-on stuff that (the students) learn is so much beyond aviation,” course instructor Kelly Atkinson said. “The guys who do the build with them are experts in this field and they are experts on how to (put the plane together). And I think, if nothing more, they are learning how to do some technical skills they will not learn anywhere else.”

This is the program’s third year being offered. Each year, students follow an online curriculum in the classroom and put together a different part of the plane.

So far, the fuselage has been put together and “now they’re working on the smaller things, like wiring and getting some parts to work like the elevator,” said Atkinson.

“I think it’s really cool, because in the classroom, you get to learn about how the airplane works and how to fly it and (in the shop) you get to actually see how it’s put together and have the hands-on experience,” student Roman Davis said.

“It’s kind of different from all the other classes. It’s kind of its own unique thing, and not many other schools have it,” student Michael Davis said. “It’s fun to take part in because you don’t get this kind of experience anywhere else.”

Each student who worked on the plan has signed it — a way of permanently leaving their mark behind, according to Atkinson.

The assembly of the plane has been completely supported by donations, Atkinson said. A variety of businesses have sponsored the program. In reciprocation, some of the sponsors’ logos have been placed on the sides of the plane.

There is no date set for the completion of the plane. According to Atkinson, the completion time will be determined by the number of students in each class.