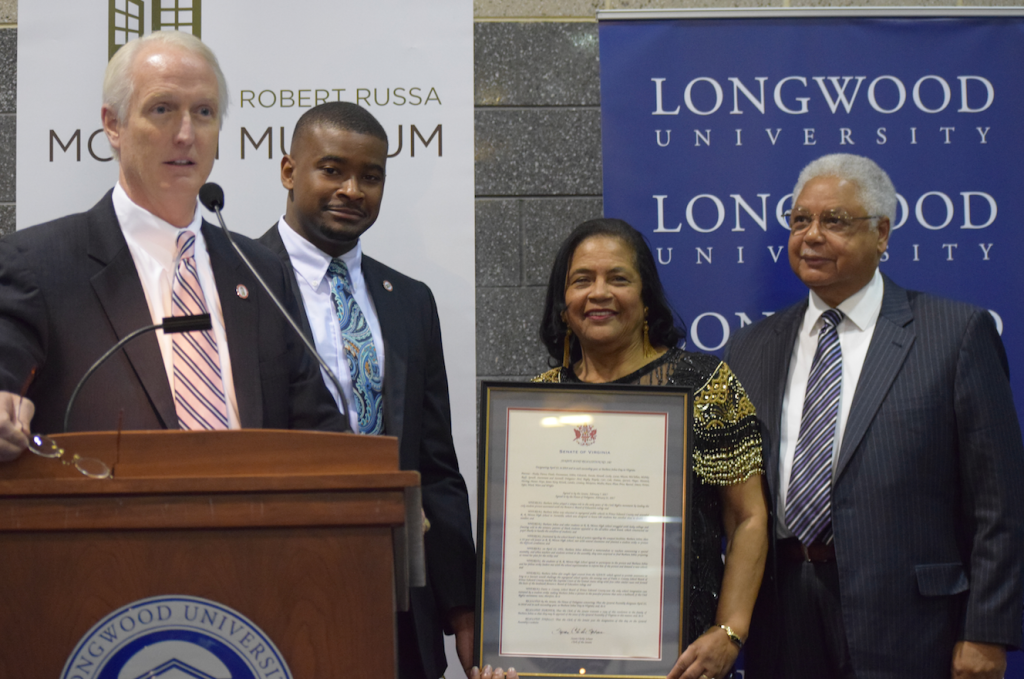 A Joint Senate Resolution marking April 23 of every year as Barbara Johns Day in Virginia was presented to Johns’ family during the annual Moton Museum Community Banquet on Saturday.

State Sen. Mark Peake, R-Lynchburg, presented the resolution to Ernest Johns, Barbara’s brother, and Joan Johns Cobbs, Barbara’s sister, before the hundreds of people in attendance during the event.

“I can’t tell you what a pleasure it is, a privilege and an honor for my wife, Lyla, and I to be here tonight,” Peake said before presenting the resolution.

The resolution was unanimously approved by both chambers of the Virginia General Assembly. It awaits the signature of Gov. Terry McAuliffe.

The resolution commends Johns for leading a student walkout on April 23, 1951 from the R.R. Moton High School, protesting the county school board’s lack of action regarding unequal educational facilities.

“Sixty-six years ago, Barbara Johns and her fellow students led a revolution that has overtaken our country,” Peake said before presenting the framed resolution to Johns’ siblings, which resulted in a standing ovation from the crowd.

“In 1951, they changed the way our country lives, the way our children are educated, the way our society behaves and brought about moral clarity to our country. It started with a 16-year-old old Barbara Johns, here in Prince Edward County … that led to one of the most monumental (U.S.) Supreme Court decisions and changes in our society of all times. It is an honor to present this resolution.”

Several days ago, Gov. McAuliffe, joined by other state officials, named the building that houses the attorney general’s offices in Richmond after Johns.

“I think it’s finally giving her the recognition that she deserves for what she did,” Peake said in a previous interview regarding the recognition Johns has received over the last several weeks in Richmond. “I mean, at her age to stand up against all the forces aligned against her like that and to be outspoken for equality and racial justice at her age just took a tremendous of courage, and it’s kind of gone under the radar to be honest with you. And I think finally people are realizing the monumental nature of what she did. I’m very happy she’s getting recognized.”

Regarding the resolution, Peake said U.S. Rep. Tom Garrett, who formerly served in the state Senate, “started this resolution … It’s not like I created it.”

The strike, led by Johns, would lead to the five-year closure of public schools in the county and the Brown v. Board of Education lawsuit, where the U.S. Supreme Court would order the desegregation of all public schools.

According to the resolution, Johns played a unique role in the early years of the civil rights movement by leading the only student protest associated with the Brown v. Board ruling.

Barbara Johns Day would first be celebrated next April.

The Farmville Town Council is seeking to honor Johns — a prompt that came from Mayor David Whitus during council’s February meeting — and will work with the county in possibly naming the Farmville-Prince Edward Community Library after her.

“It’s so wonderful and awesome to know now that all of the sacrifices that Barbara (made) and the way she led fiercely and the distance that she made in America and in the nation and in Prince Edward County (are being recognized),” said Joy Cabarrus Speakes in a previous interview. Speakes was Johns’ classmate who marched with her in 1951.

According to the resolution, Davis v. County School Board of Prince Edward County was the “only school integration case initiated by a student strike, making Barbara Johns a pioneer in the peaceful protests that were a hallmark of the civil rights movement.”