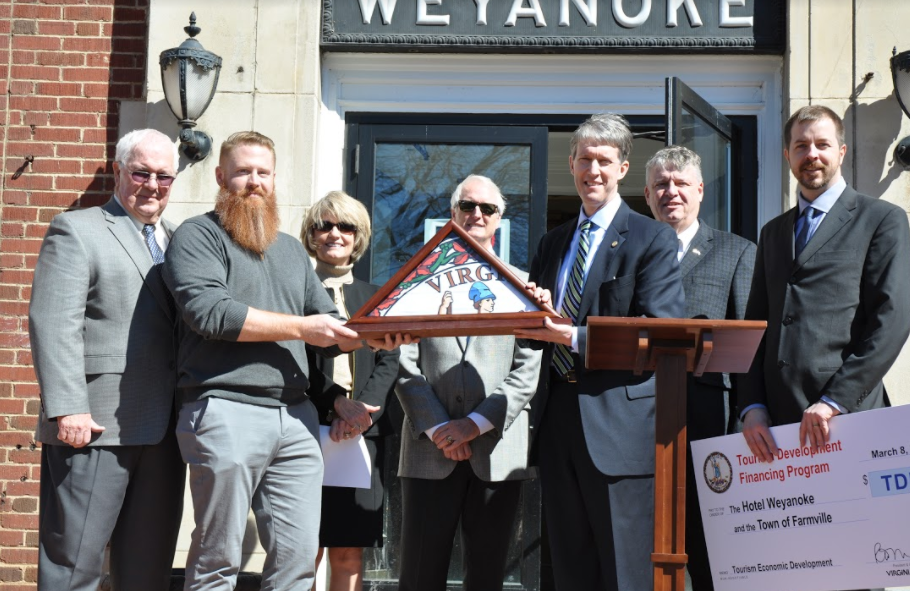 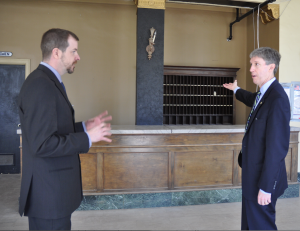 Weyanoke co-owner Ross Fickenscher, left, explains the extensive renovation project to state Secretary of Commerce and Trade Todd Haymore in the lobby of the building.

The Virginia Tourism Corporation (VTC) and state leaders have pledged support for the Hotel Weyanoke’s renovation and restoration project in Farmville — one that’s slated to create 76 new jobs and spur more than $7 million for the economy of the town.

The announcement was made Wednesday on the steps of the historic hotel, located at 202 High St. in downtown Farmville.

The $12.2 million project will receive support through the VTC’s Tourism Development Financing Program (TDFP), a gap financing program for larger-scale tourism development projects, geared toward fostering partnerships with developers, localities, financial institutions, the Virginia Resources Authority and VTC, according to state officials. “The project reflects a projected tax benefit of over $500,000 in its first full year of operation. The hotel is slated to open in the spring of 2018,” officials said.

The building, which closed for construction several months ago, is one of three hotels under construction in Farmville, which will net about 245 new rooms in town.

According to a release from Gov. Terry McAuliffe’s office, the hotel, once complete, will feature four

“unique food and beverage venues including: Sassafras, a bakery and market; Humble Pie, an artisanal pizza grill and market featuring locally-sourced organic ingredients and family recipes; Campagna, an Italian trattoria and tasting room; and The Bridge, a rooftop refreshment retreat.”

Mayor David Whitus, who welcomed the crowd on the steps of the building, cited Farmville being America’s first two-college town in his opening remarks.

“It’s one of many projects we have going on,” Whitus said, referencing the other hotels under construction. “The Weyanoke is clearly a historical gem. It was built almost 92 years ago … It has seen a lot of changes through the years, basically because of Longwood’s growth and the revitalization downtown.”

He noted a visit from Helen Keller during a Lion’s Club convention. “The Weyanoke has seen a lot of celebrities … come through its doors.”

He said residents and visitors “would really enjoy the renovated project. It’ll provide a lot of opportunities and a lot of jobs.”

According to the release, the developers of Hotel Weyanoke will rehabilitate and convert the existing 27,000-square-foot building at 202 High St. and construct a 30,000-square-foot addition on the same property. Once completed, the hotel will include 70 well-appointed hotel rooms.

Secretary of Commerce and Trade Todd Haymore said tourism was one of the most “powerful economic drivers” in the state and “the second-largest industry in the commonwealth of Virginia.”

Haymore later presented a check to Weyanoke co-owner Ross Fickenscher and project leader Garrett Shifflett on behalf of the TDFP.

“Here in Farmville, in the Farmville-Prince Edward area, let me reel these off. Every year, $20 million-plus in tourist spending takes place, more than 220 jobs directly were associated with tourism, $4.3 million in payroll coming from the tourist industry here and $1.3 million in local and state taxes were generated right out of here (in the) Farmville and Prince Edward County area.”

The Virginia TDFP works by allowing approved tourism projects to temporarily retain a portion of state and local tax revenue generated from the project, combined with a matching contribution from the developer, to provide gap financing for up to 30 percent of the project’s total cost, according to the release. “This is the fifth project approved under the commonwealth’s TDFP.”

“Through the TDFP program, the Hotel Weyanoke, the Town of Farmville and the commonwealth will share matching contributions toward the project, based on one percent of the hotel’s quarterly revenue. Over the course of the project’s gap lending, each entity will contribute an estimated $916,700 over a 10-year period.”

Haymore presented town officials and those associated with the project a Virginia flag flown over the Capitol.

“I’m very pleased the Hotel Weyanoke is the recipient of the grant, and I know that upon completion, it will enhance an already beautiful area,” Bradley said, reading Edmunds’ remarks. “And thanks for investing in us … When one part of the district grows and thrives, we all thrive.”

“This is a great day for Farmville and the surrounding area,” said Town Manager Gerald Spates. “And I want to recognize one individual that did all the work on this project,” he said, asking Town Planner Cindy Morris to join him on the steps. “Cindy worked very hard … and we couldn’t have done it without you. Thank you, Cindy.”

Spates offered thanks to Fickenscher “and his staff for the trust and support that they’ve given this community. I mean, without y’all, we couldn’t do it … We think this is going to be a great project for Farmville.”

“The Hotel Weyanoke will fill a much-needed void of lodging, dining, entertainment and meeting space, and is itself, a historic attraction,” Fickenscher said in the release. “Located in downtown Farmville, the Weyanoke will host guests who can easily walk to nearby Main Street shops, Green Front Furniture, the Moton Museum, Longwood University, the Sarah Terry Trail, High Bridge Trail State Park, The Longwood Center for the Visual Arts and more. This will be a new, exciting experience for visitors to stay longer, eat, shop and experience Farmville in a new way.”

“Today’s announcement is wonderful news for Farmville and for Longwood and just the latest milestone of momentum in our community,” said Longwood President W. Taylor Reveley IV in the release. “A new wine bar and brewery, the Longwood bookstore moving to North Main Street, a spate of new construction on campus and in town all demonstrate the great steps we are taking together. The new Weyanoke Hotel will be a jewel in the crown of a vibrant and revitalized downtown, attracting visitors who will discover and rediscover this great place.”

“I think it’ll be a big asset to the Town of Farmville and Prince Edward County,” said Farmville District 101 Supervisor Howard F. Simpson. “People coming here will have places to stay … It’s just a wonderful place.”