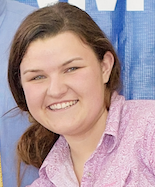 Fuqua School senior and Cumberland County resident Sarah-Jane French has received a $2,595 scholarship for exhibiting her livestock in the 2016 State Fair of Virginia.

According to a press release from the State Fair, French was one of 12 people to receive a portion of the $16,235 offered in scholarships. French was a platinum winner at the senior level, which was at the top of the categories to win.

According to Stuart Sanders, the State Fair education and program manager, French won the scholarship for showing goats.

Rob French, Sarah-Jane’s father, said his daughter has been showing livestock since she was 10 years old.

“She’s been showing at the state level, and she’s shown a lot nationally also,” Rob said.

Sarah-Jane has showed at the American Royal in Kansas City, Missouri. “She was (in) the intermediate reserve goat show out there.”

Rob said to get better at showing in big venues, practice makes perfect.

Older children usually perform better than younger ones, Rob said, because they’ve learned from their mentors.

“That table kind of turned on her, if that makes sense,” Rob said. “When she was younger, she was looking up to the kids. Now, she’s one of the ones that the kids look up to to help.”

“She’s been involved in agriculture all her life basically,” Rob said. She’s headed to Butler Community College out in El Dorado, Kansas. She will be a member of their livestock judging team.”

Rob said he thinks her career will land her in  teaching agriculture.

According to the March 14 press release, the fair offers up to $70,000 each year in scholarship money through 4-H, Future Farmers of America and vocational competitions and specific equine, fine arts and horticulture competitions.

Officials said in the release that since 2013, the State Fair has awarded more than 800 scholarships and has dedicated more than $282,000 to youth education.

“The young people who earned the applied youth livestock scholarships represent the future of Virginia agriculture and have demonstrated a commitment to that future,” said M.L. Everett, president and chairman of the State Fair board in the release. “We’re proud to invest in these winners’ respective futures, and we’re excited about the growth of the fair’s youth livestock scholarship program.”