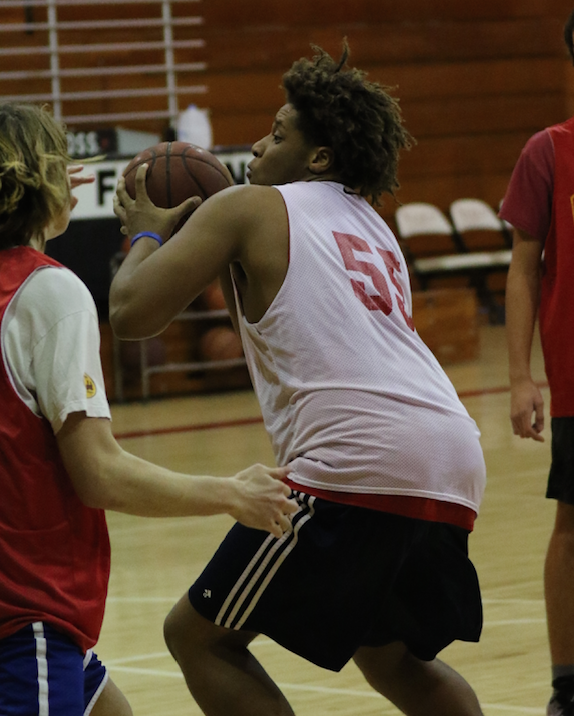 TITUS MOHLER | HERALD Fuqua School senior power forward Julian Gee led his team with 25 points Tuesday evening during the No. 10 Falcons’ 58-46 loss to host No. 7 Roanoke Catholic School in the first round of the VISAA Division III state tournament.

“We didn’t play our best,” Falcons Head Coach Charles Thomas said. “I think the week layoff hurt us a little bit. … We kind of weren’t in sync offensively or defensively.”

The game Tuesday was the first action Fuqua had seen since Feb. 17, when it concluded its regular season with an 85-49 rout of visiting Banner Christian School.

“Continuing to play kind of keeps you in a certain rhythm or mode, and we were just out of whack from what I could see,” Thomas said. “When you get to the state (tournament), everybody’s good, so if you’re not on top of your game, it just compounds itself.”

The coach made a point to praise Roanoke Catholic for having a good team, noting it may have been contributing to his team being out of rhythm.

The Celtics led 14-9 after the first quarter and 33-19 at halftime. The Falcons won the third quarter 14-10, but then the home team rebounded to eventually win the fourth quarter 15-13.

“We closed it to four points with, like, three minutes to go,” Thomas said. “Then (we) just didn’t make shots down the stretch. And then when we had to foul them down the stretch, they made their free throws.”

Coach Thomas noted that the team had only four scorers on the night, with sophomore guard Chipper Ford scoring seven points and junior forward Hunter Gilliam scoring one.

“We’ve got to have more production,” the coach said.

“We had a great season,” Thomas said. “I’m proud of our kids. I’m really proud of them. You’re talking about a team that won five games the year before and won 15 (this year), and basically, it’s the same team back.”

In the seven state polls generated by the VISAA during the course of the season, the Falcons were never ranked lower than eighth in the state, and they rose as high as No. 6.

Thomas made note of the character and persevering spirit of his team this season.

“Even in last night’s game, we got behind, we’re on the road, we weren’t playing our best, but we kept fighting and closed it to four,” he said Wednesday afternoon. “It was a good sign for our team, so I really like our kids. I thought they gave us everything they had every game this year.”

Thomas said a lot of players stepped up their game.

“I thought Julian had a good season,” he said. “Tyler, he ended up averaging 17 points a game this year, which was up from last year.”

But ultimately, Thomas noted it was not any one person who was the standout.

“I think it’s just a collective effort of everybody coming to practice every day, practicing hard, trying to get better,” he said. “All of them just wanted to win and do as well as they could, and they did that.”