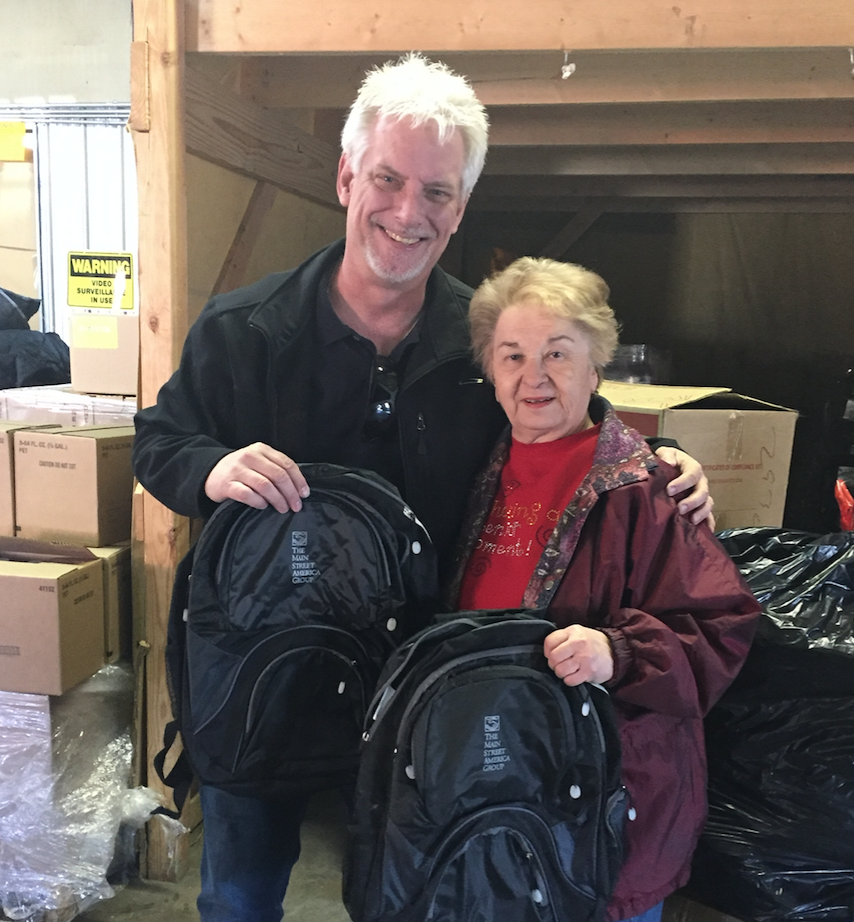 Farmville Area Community Emergency Resources (FACES) has received a donation of 125 backpacks for a program that puts food in the mouths of children in area schools.

“We distribute the food during the school year to students who have been identified by teachers or guidance counselors as in danger of not getting sufficient food over the weekend,” said Dr. Ellery Sedgwick, president of FACES. “It’s the type of food kids like and is easy to prepare.”

The program provides two breakfasts, two lunches, two dinners and some snacks for children on the weekend.

The food provided includes boxed cereal or Pop-Tarts, soup or tuna fish, canned spaghetti or ravioli, snacks and, if available, fresh produce. The meals are packed on Thursday by a rotation of church volunteers and distributed on Friday.

Stump organized the donation of backpacks through the company he works for — the Main Street America (MSA) Group.

“(My wife Joy) and I started volunteering with FACES soon after we moved, and while speaking with one of the board members at FACES, they talked about the backpack program,” Stump said. “That had a big impact on me. When I joined the company in 2015 they gave me some trinkets and one of those was a really nice backpack. Knowing the company was pretty philanthropic, I contacted our media communications director and asked them if they would be interested in making a donation.”

Stump’s initial request was for 75 backpacks in September 2015. The company went beyond the request and donated 105. In January, Stump said he was approached again by FACES and was told all of the bags had been utilized.

That’s when Stump went back to the company and requested they make another donation.

“Within 30 minutes, he got back with me and said, ‘Sounds great! We’re on board. We’re going to donate 125 backpacks for this go-around.’”

Stump said he was very grateful to the company for its donations.

“I couldn’t be prouder of Main Street America Group … and FACES and the work they do for the Prince Edward County area,” Stump said. “Me being able to bring the two parties together has been one of the most rewarding experiences I’ve had in volunteering. I’m just happy to see the program has flourished and that it’s done so with the help of MSA.”

Sedgwick said he was very grateful for the donation.

“FACES is completely voluntary and operated on local contributions. We don’t exist without a supportive and local community,” Sedgwick said.