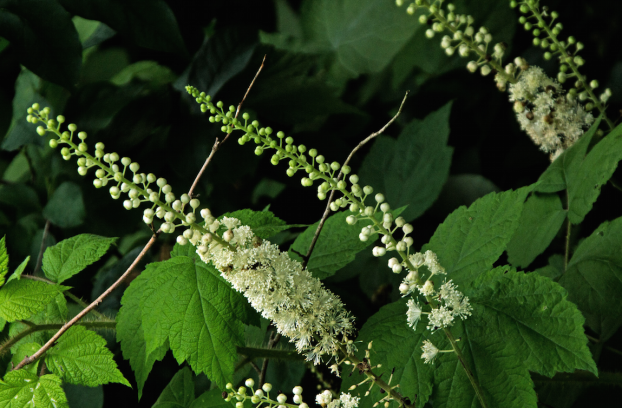 Black cohosh — 2017 Wildflower of the Year

As soon as the new year begins, I’m always anxious to learn what the Virginia Native Plant Society’s wildflower of the year will be. The choices are always interesting and sometimes unexpected.

They’ve ranged from well-known and beautiful plants, such as bloodroot and large-flowered trillium, to quirkier choices, such as skunk cabbage and wild ginger.

This year’s choice, black cohosh (Actaea racemosa) is stunningly beautiful when encountered in the forest and is also an interesting addition to the home garden. If you’ve ever stumbled upon a patch of black cohosh in the woods, you’ll immediately know why it’s often called fairy candles.

Black cohosh is a perennial flowering plant found in all areas of Virginia except the outer coastal plain. It grows best in mesic to dry woodlands that have rich alkaline soil. It’s tall, sometimes reaching nearly 8 feet, and has broad basal leaves with toothed edges.

The white flowers are produced on a long stem and arrayed on a raceme that can be more than 20 inches long. The flowers don’t have petals or sepals, just clusters of stamen around individual stigma. The flowers have a heavy, slightly fetid scent that gives the plant its other common name, bugbane.

Black cohosh was used by Native Americans and early settlers to treat a wide variety of ailments. Some herbalists say that black cohosh has anti-inflammatory and sedative effects.

Black cohosh is an excellent choice for the woodland garden where its height adds an element of architectural interest. It grows very slowly and is best allowed to naturalize in an area with full to partial shade.

Black cohosh is the larval host for the Appalachian azure butterfly. Scientists believe the plant is pollinated primarily by bumblebees.

Black cohosh can be found throughout our area. There’s a particularly dramatic stand of it on the trail around the lake at Peaks of Otter. It’s usually in bloom the first week in July.

Help! My Azaleas have yellow leaves

Several weeks ago, a friend emailed me a question about his azaleas. They’ve been planted in the same location for... read more