Werth runs for his son 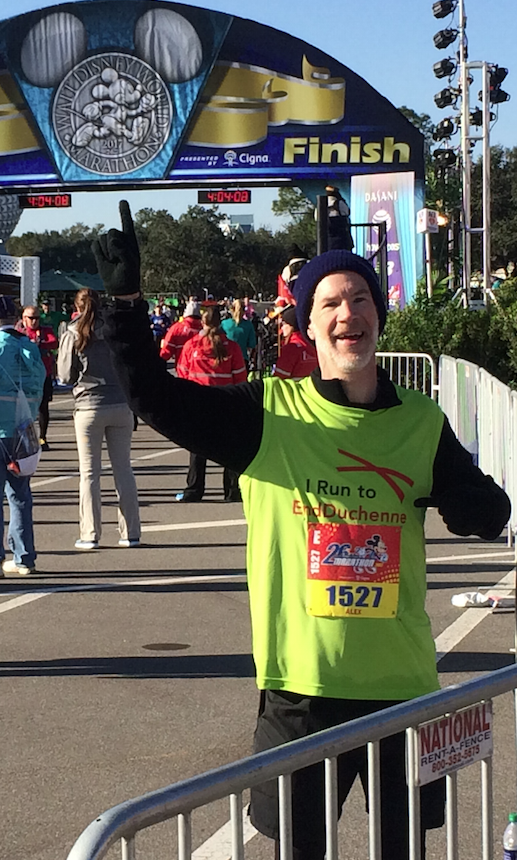 Dr. Alexander Werth smiles at the end of a marathon he ran in Florida to raise funds and awareness for muscular dystrophy, which his son, Colin, was diagnosed with in 1998. 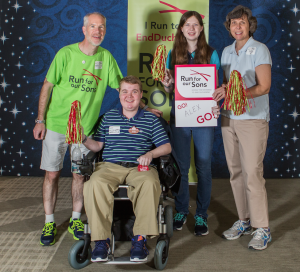 Members of the Werth family pose at Walt Disney World in Florida, where Alexander, a professor at Hampden-Sydney College, participated in a marathon to raise funds and awareness for muscular dystrophy, which his son, Colin, was diagnosed with in 1998. Pictured are, from left, Alexander, Colin, Colin’s sister Gwen and his mother Diane.

A professor at Hampden-Sydney College (H-SC) is using his love for running to help raise awareness and money for muscular dystrophy (MD).

Trinkle Professor of Biology at H-SC Dr. Alexander Werth participated in the Walt Disney World Marathon in January as part of a team with Run For Our Sons, a group created to raise money and awareness for Duchenne Muscular Dystrophy (DMD) through Parent Project Muscular Dystrophy (PPMD).

Werth, 52, said the competition was his first full marathon. He said he started to running after his son was diagnosed with DMD at the age of 3. It is a way to relieve stress and relax, Werth said.

“I did it because it was an opportunity to raise funds and awareness, and I was able to do it,” Werth said.

Colin, 22, was diagnosed in 1998 with DMD, one of the most common and severe forms of MD. Caused by a mutation found on the X chromosome, Werth said, the genetic disease is more common in males than females. The mutation prevents the production of a protein needed in muscles, which can cause the muscles to tear and be replaced by scar tissue, causing issues with movement as well as heart and lung issues.

According to Werth, one in every 3,000 males is diagnosed with DMD.

According to Nicole Herring, the endurance program manager of Run For Our Sons, the program saw 160 participants run in this year’s marathon. Together, the participants raised more than $445,000 for DMD research.

“It’s amazing and inspiring,” Herring said. “Most of the runners have connections with DMD — either a friend or family member who has it — so they are really invested in the success and the mission of PPMD.”

Werth said around 30,000 people ran in the Walt Disney World Marathon this year. He said the day of the race saw temperatures in the parks at just above freezing — what he called “a real freak weather thing (for Florida).”

“It was very difficult at the end of the marathon; I had cramps in my feet, and it was very tough to walk and run,” said Werth. “I realized this is the battle that a lot of people are facing everyday. It kind of puts things in perspective.”

“We’re very grateful to all the people in the Hampden Sydney and Farmville (communities) who have helped us who are not personally effected, but they know Colin’s story,” Werth said. “It’s wonderful that we live in a small community where people care so much.”

For more information on DMD and the PPMD, visit parentproject.org or endduchenne.org.