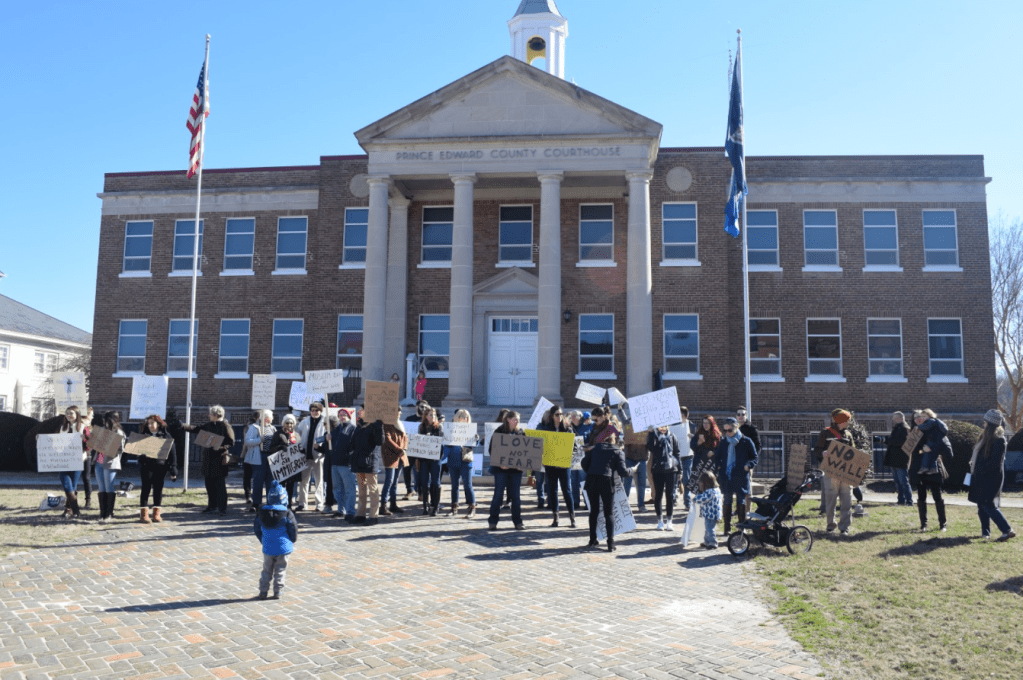 BRIAN KLINGENFUS | HERALD Over 50 people, many of whom were Longwood University students and members of the Farmville community, attended the Saturday protest held at the Prince Edward County Courthouse.

While the Friday rally centered on solidarity, support and reassurance, according to event organizers, Saturday’s more directly addressed Trump’s order.

Around 40 Longwood University students, faculty and staff gathered on campus Friday to march in support of those affected by the ban.

The march was initiated by the Citizen Leadership and Social Justice Education groups at Longwood in collaboration with other student groups. Despite the chilly air, dozens of protesters gathered to march.

On Saturday, the crowd grew to more than 50 people, all of whom gathered on the lawn of the Prince Edward County Courthouse in downtown Farmville, protesting against what those carrying signs cited as fear and hatred across the country.

“We reached out to church organizations, the NAACP; we reached out all over the place,” Hyman said. “We wanted to get the community out here and show their support for this movement against Donald Trump’s executive order,” he said Saturday.

People of all ages attended the rally, from one to 70. Many brought homemade signs, while others toted provided signs or created their own from blank poster board available at the site. 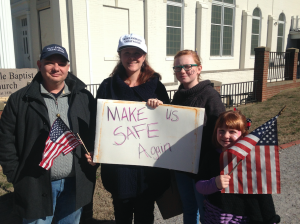 Irene Thornton, a sophomore at Fuqua School, attended the protest with her mother, Saranna.

“I think it’s important to let people know that everyone is an immigrant,” Irene said. “So, when you try to ban the immigrants, you’re banning what America’s made of.”

“In economics, one of the things we know is the great ideas and the great work effort immigrants bring to the country,” said Saranna, an economics professor at Hampden-Sydney College. “For a president who wants to increase economic growth, you should welcome immigrants.”

The large crowd was met with at least four people in support of Trump, who stood closer to Main Street, joined by car horns, revving engines and chants from vehicles passing by.

Those supporting the ban arrived at the courthouse around 1 p.m. They included Chris, Diana, Olivia, and Abigail Shores, of Cumberland, who chanted “Build that wall!” and “Make America safe again!”

The Friday march began at the Center for Communication Studies and Theater building on Longwood’s campus. Students and faculty carried signs, chanting, “No hate, no fear, refugees are welcome here!”

The group marched across Longwood’s campus to Beale Plaza, near High Street.

Brenda Pereira, president of the Hispanic and Latino Association at Longwood and a staff member in the Office of Student Diversity, said Friday that something needed to be done.

“Clearly there is an uneasiness; we have international students whom this is personal for, and (the ban) isn’t okay,” Pereira said. “It’s gotten to a point where it’s passed politics to a point where it’s humanity and morality, so we are here to give the students a voice and a platform to show they are against this.” 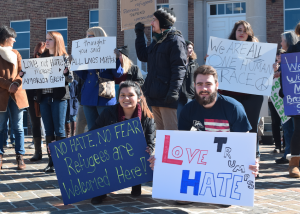 “There was just a need,” Page said Friday. “If you look at the (atmosphere) and the feeling that’s been going on across the country and the campus over the last few weeks and months, there’s a tremendous polarization. This (event) was intended to be not a political rally or an anti-anyone rally, but more of a rally of solidarity, support and reassurance that we are one community.”

Both events reportedly ended peacefully with no conflicts.

Hyman said he was very satisfied with the support from the community and was proud of how the event turned out.

“This is what America is all about. It’s about supporting one another and welcoming people into our country,” Hyman said Saturday. “Seeing people out here supporting that, this is why America, in my opinion, is the greatest country in the world.”