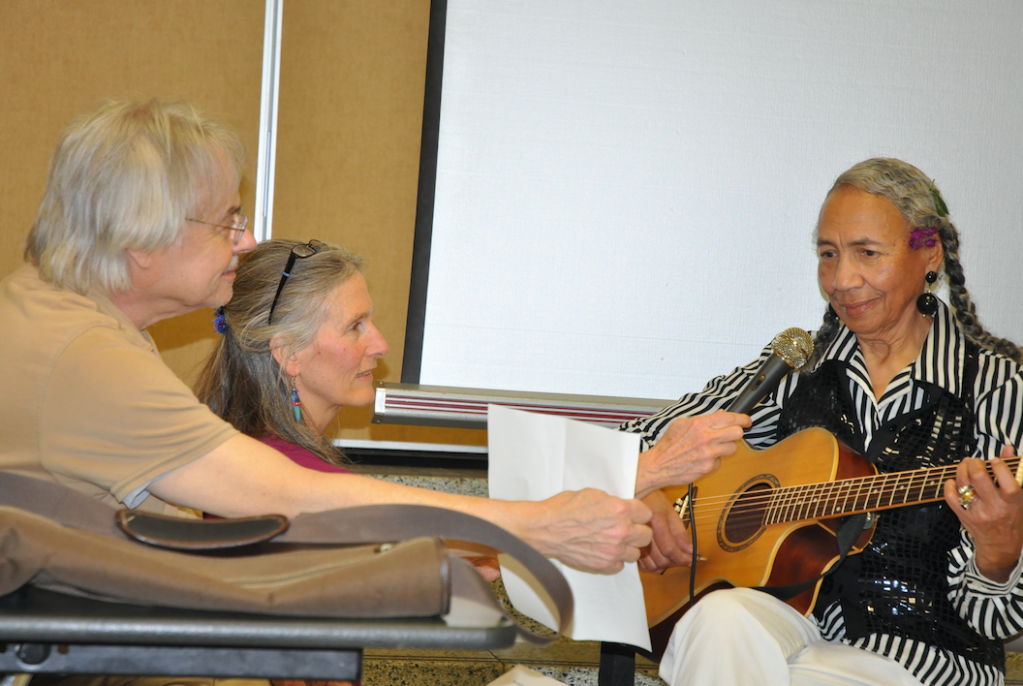 JORDAN MILES | HERALD Evelyn Dent, right, plays her guitar, leading the crowd of more than 50 people to “This Land Is Your Land.” Kirk Bowers and Heidi Berthoud assist her.

The event — which included speakers from numerous groups in opposition to the proposed Atlantic Coast Pipeline (ACP) project — comes as a precursor to a Federal Energy Regulatory Commission (FERC) public hearing on the DEIS set for Tuesday at 5 p.m. at the Moton Museum and National Historic Landmark, located the corner of South Main Street and Griffin Boulevard in Farmville.

During the meeting, representatives from Friends of Buckingham, Friends of Nelson, Friends of the Central Shenandoah, Concern for the New Generation, Appalachian Mountain Advocates, Yogaville Environmental Solutions and the Virginia chapter of the Sierra Club — all of which are opposed to the ACP and 53,783 horsepower compressor station — were present and offered information on ways landowners and community members could use venues through FERC to oppose the project.

FERC is the body of federal regulators that could give ultimate approval of the project to ACP LLC, which is being led by Dominion.

“This isn’t the end. This, in a way, is just the beginning,” said Friends of Buckingham President and Co-Founder Chad Oba, noting the event served as an opportunity to learn from experts about how to submit information through FERC.

FERC released its DEIS regarding the proposed 600-mile pipeline project in late December, concluding the project’s impact would be “less than significant.”

Playing her guitar, Evelyn Dent, who lives in the area sited for the compressor station, led the crowd in unison to “This Land is Your Land” before Wild Virginia’s Ernie Reed spoke. 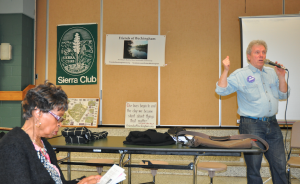 “My goal in this is to stop the ACP,” Reed said, noting the two ways the project could cease: making Dominion change their minds or through legal venues.

“We have to do everything we can to make that happen,” he said.

“Now, they’re facing a lawsuit. And they’re going to have to deal with that … That was huge,” Reed said, noting the civil suit filed in Buckingham Circuit Court by farmer Carlos Arostegui.

“We have the results of the DEIS,” Reed said. “The FERC got its people together to look at all the information … about the possible impacts of this pipeline.”

He said information submitted by those opposed to the ACP was not included in the DEIS.

“That document is not just bad, it’s terrible. It ignores the real important facts,” he said. “It does not include the information that you and we submitted … There are very important issues that can be found and pushed back against.”

“What all the information does is it provides a basis for a future lawsuit,” he said. “You want to slow down the process,” he said, noting a larger volume of comments “slows things down.”

He explained ways those who oppose the ACP could offer comment to FERC on the DEIS.

County supervisors approved a special use permit for the gas fired compressor station in early January.

Dominion is the energy firm leading ACP, LLC, which is seeking federal approval of the 600-mile natural gas pipeline. If approved, the pipeline would begin in West Virginia, span Virginia and end in North Carolina. The pipeline would cross Buckingham, Cumberland and Prince Edward counties. 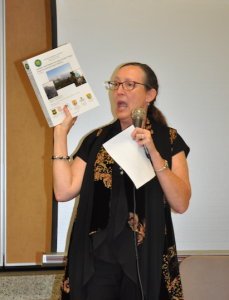 JORDAN MILES | HERALD
Irene Ellis Leech holds part of the Draft Environmental Impact Statement before the audience, citing the effects the proposed pipeline would have on her farm at Mt. Rush.

“We need people to participate and to help us especially here in Buckingham,” said Pastor Paul Wilson, who preaches at Union Hill and Union Grove Baptist Churches, both of which lie in walking distance to the site of the station, slated to be built between Shelton Store and Union Hill roads along Route 56. “The compressor station can be stopped … The most influential people who can stop it are at the church … we are in the environmental impact zone.”

“It is nowhere near over. It is just beginning,” he added.

“We need everybody … Our job at this point is to respond to that,” Irene Ellis Leech said of the DEIS. “This is our one chance to make sure … the final version of this document fairly and accurately represents what is before us in our community.”

Leech said, if approved, her family’s farm would be bisected by the natural gas pipeline.

“It’s going to matter to us. I have learned that our country has not been putting a lot of money into the safety aspect of pipelines,” she said, noting federal regulators “allow thinner pipe in rural areas. They allow the cut-off values to be further apart in rural areas.”

Tom Hadwin, a former gas and utility executive who now represents Friends of the Central Shenandoah, said “from an energy system point of view, (the project) doesn’t make sense. We don’t need it … From a business point of view, it’s important to Dominion.”

He said Dominion creates “an illusion that we need these things,” noting traditional gas use “isn’t growing.”

He said the Transco pipeline, which the ACP will intersect with at the site of the compressor station, had room for more capacity.

“Essentially, the ratepayers of Virginia are subsiding the pipeline. … And we don’t need it. But they need it,” adding, “If we don’t need it and it costs more, well then this pipeline exists purely for private gain.”

“The same emissions or toxins that are found in the cigarettes are found in our natural gas compressor station pipelines,” said Marie Gillespie, who lives in the area of the proposed station. “This is impacting me in so many ways.”

Citing potential impacts and air emissions from the station, she said, “Is that a legacy we want to leave for our children?”

“Over a period of time really we don’t know what these emissions are going to do … We have too many who sit back and think it’s all done … We have to marshal our forces,” Gillespie said.

Dr. Lakshmi Fjord, a member of Friends of Buckingham and an anthropologist, presented information from the Southern Environmental Law Center, which, according to Fjord, has agreed to review the DEIS.

“One of the impacts that FERC is supposed to consider …” is if the project falls disproportionately on minorities,” Fjord said.

“We’re going door to door to in that compressor station neighborhood.”

“There was nothing there. It was shocking,” she said of the DEIS lack of addressing the ACP’s impact on cultural resources.

“The FERC staff concludes that construction and operation of ACP … would result in temporary and permanent impacts on the environment, and would also result in some adverse effects. With Atlantic’s and DTI’s (Dominion Transmission Inc.) implementation of their respective impact avoidance, minimization and mitigation measures as well as their adherence to our recommendations to further avoid, minimize and mitigate these impacts, the majority of project effects, with the exception of impacts on forest vegetation, would be reduced to less-than-significant levels,” the commission staff said in a release.