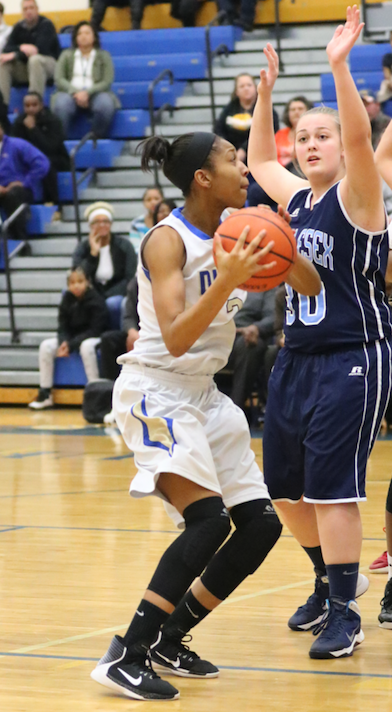 Cumberland High School’s varsity girls basketball team punched its ticket Wednesday to its first-ever appearance in the Conference 42 tournament championship game, while also clinching a berth in next week’s Region 1A East tournament.

The Lady Dukes trailed 13-6 early against Middlesex on Wednesday and were still behind 15-12 at the end of the first quarter. But they recovered in the second quarter and held a 41-30 halftime lead, which they built up to 57-41 after three quarters.

“We haven’t played in a week-and-a-half, so I knew we were going to come out a little sluggish, but once we got our feet up underneath us, I think we just played well,” Cumberland Head Coach Omar Liggins said.

He highlighted Anderson, who finished with a triple-double: 40 points, 12 rebounds and 11 steals.

She did not dwell on her performance, though, shining the spotlight elsewhere.

“I feel like we all played as a team,” she said. “We did what our coach wanted us to do, and it’s amazing because we can finally get somebody like him recognized for all that he’s done for us, because he’s done a lot, and I feel like everybody needs to know.”

During the regular season, Anderson reached the 1,000-point milestone in her varsity career.

Another key contributor Wednesday was Cumberland senior center Tayziana Booker, who finished with 15 points and 14 rebounds.

Now, the Lady Dukes turn their attention to Mathews and the chance to win their first conference title.

“I’ve heard Mathews is a good team,” Liggins said, noting he has heard the Lady Blue Devils are fundamentally sound. “So, we’ve got to come out and play with the same intensity we played with tonight.”

Anderson said she is excited for the game.

“I’ve been playing varsity since I was in ninth grade,” she said. “I’ve never been to a conference championship, so it’ll be fun. May the best team win.”