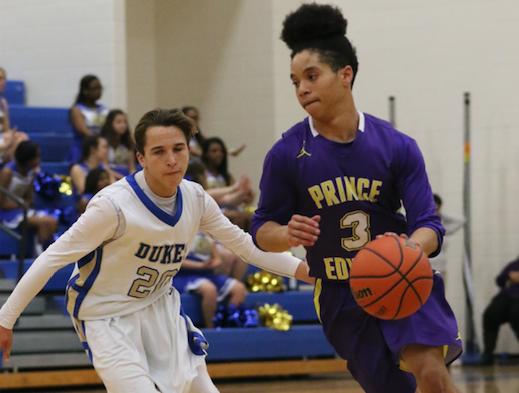 After a promising start to the season, Prince Edward County High School’s varsity boys basketball team lost eight of its last nine games in the regular season, and then the seventh-seeded Eagles fell Thursday in the quarterfinals of the Quad Rivers Conference 34 tournament.

“I think that we got a bad jump start, and we just couldn’t catch up,” Prince Edward Head Coach James Scott said. “We came out of the gate a little slow, and they set the tempo, and they never did look back.”

The Greensville Eagles led 17-3 after the first quarter, then outscored the Prince Edward Eagles 21-13 in the second quarter and 27-8 in the third.

“They pressed, and we turned the ball over, and they probably made maybe five shots outside,” Scott said, confirming most of Greensville’s success came in the paint.

After starting the season 8-5, Prince Edward finished with an overall record of 9-14.

The team featured some veteran players, including seven seniors. In terms of what accounted for the poor finish, Scott’s focus was on himself and his coaches.

“I think that we as a staff, we’ve got to go back to the drawing board,” he said. “This summer, the coaches, we’ve got to go to more clinics and get more strategy to work with the kids. We had a lot of good talent, but we, as a staff, just didn’t get it together — chemistry. So, it’s all on the staff. We just couldn’t get it going, so we’re going to concentrate on going to some (Atlantic Coast Conference) clinics and some Longwood clinics, and we’re going to get it right.”