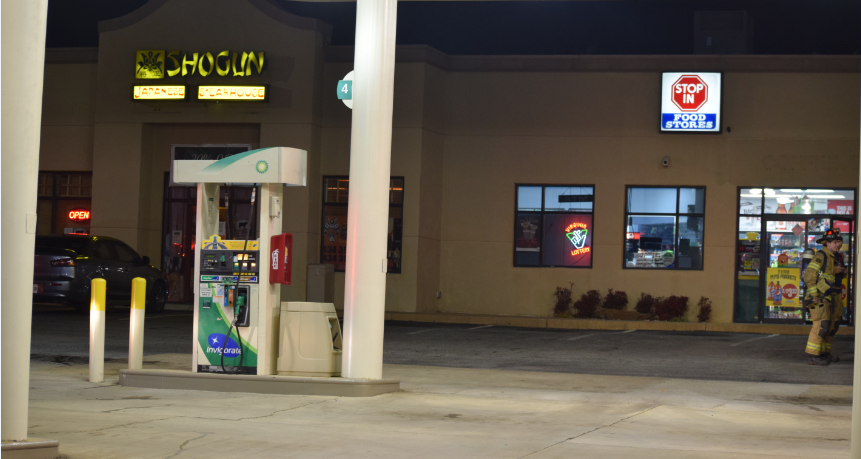 BRIAN KLINGENFUS | HERALD Fire departments were called to the BP on South Main Street in Farmville after patrons at the Stop-In Convenience Store complained of the smell of propane.

Hampden-Sydney and Farmville volunteer fire departments responded to reports of a propane leak at the Stop-In Convenience Store and Shogun restaurant on South Main Street in Farmville on Wednesday at about 7:30 p.m.

According to Farmville Fire Department Chief Andrew Goss, crews were greeted with a strong smell of propane in the area, both inside and outside the buildings, and immediately began working to determine the source.

“We evacuated the building and began shutting the tanks down and dissipating some of the vapors,” Goss said. “We couldn’t determine exactly where it was coming from, (so) we shut both tanks down at the furthest point we could to prevent any leaks in the system.” 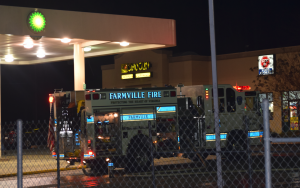 After shutting down the propane tanks, crews doused the tanks with water to help dissipate the gas.

Tinesha Binns, a cashier at the Stop-In, said customers had been complaining about the smell of gas throughout the day.

“Customers were saying it smelled like gas; it was going on for a few hours,” Binns said. “Then, Sheriff (Wesley) Reed came into the store and he smelled the gas, and called the fire department to have them come out here to check for a gas leak.”

Jeffrey Thompson, a waiter at Shogun, said he went outside to investigate after seeing a handful of firefighters outside.

“I came back inside and overheard a customer saying there was a suspected gas leak,” Thompson said. “A fireman came in later to ask if he could check the back of the restaurant for any smells of the propane. They said they didn’t detect any, but they later came back and said they smelled it and asked us all to evacuate.”

Fire crews left around 9:30 p.m. and the area deemed safe.

The cause of the leak is being investigated.