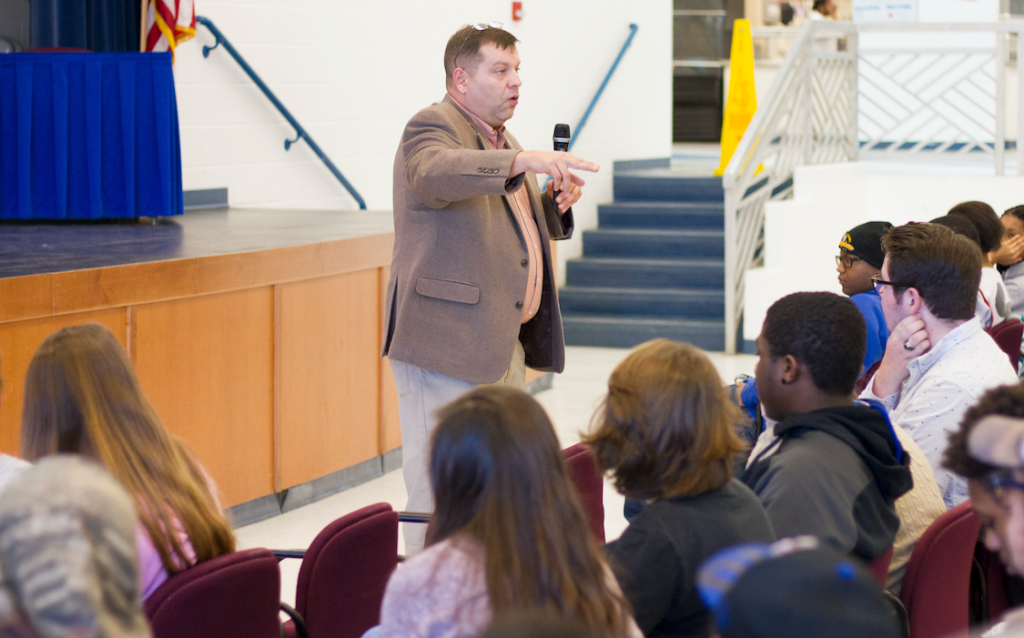 The congressman spent part of the afternoon sharing his philosophy and answering questions with Cumberland High School seniors.

Garrett, who was elected in November to his new office, is a former state Senator for the 22nd District.

Garrett spoke with the students about a variety of subjects, from civil rights leaders Barbara Rose Johns and Martin Luther King Jr. to women’s rights and public education.

“We’re always moving towards a more perfect union. We’re always trying to be better than we are,” he told the students.

He shared the story of Johns, who led the student strike at Moton High School, effectively establishing the only Brown v. Board of Education case initiated by students rather than parents or teachers.

Garrett proudly told the students of the proposed statewide day celebrating Johns, which he said he had a hand in creating.

Garrett told the students of his love for history, sharing anecdotes about King, Johns and other historical figures.

“There’s enumerable people whose names we don’t know and never will,” he said, noting each of the seniors will have an impact on their communities.

“Little things add up to giant things,” he said.

Garrett emphasized the importance of religious freedom, and said he doesn’t want to live in a country where you’re not allowed to practice your faith.

Following Garrett’s speech came a period for students to ask questions. During the first question posed, a student asked Garrett to share how he planned to stimulate job growth for individuals with disabilities.

Garrett said he wanted to create more jobs for everyone, not just those with disabilities.

He said the biggest problem with rural communities was that after students leave to attend college, they are not able to come back “home” because they can’t find a job in the area.

The real money and job generators are in ideas, Garrett said, noting he wants to incentivize keeping intellectual capital at home.

“Commerce and economic activity follows four-lane roads,” Garrett said as he laid out his plan to add lanes to area roads.

Other students asked Garrett his opinion on the Electoral College system.

“The Electoral College exists so that California doesn’t pick the president,” Garrett said. “Small states … were afraid that giant states would impose their will on everybody.”

He said he believed in the Electoral College and wants to see it stay in place.

Garrett, after clarifying the student’s question, said there needs to be a balance between both proficiency and growth. He criticized “testing students into oblivion” and praised creativity in the classroom.

“We need to empower creative teachers who engage with students differently,” Garrett said.

“We hurt young people when they tell them what they can or can’t do because of where they came from or what they look like.”

Garrett said there should be some level of measurement for proficiency.

The question of discrimination for women in the workforce was brought up by one student, followed by an inquiry about defunding Planned Parenthood by another.

“There’s a lot of injustice to be addressed. It’s how we address it,” Garrett answered, emphasizing that it wasn’t up to him to push his morals on someone else.

He said the government has to decide if it has a right to control abortion.

“In this country we can disagree … and we don’t kill each other,” Garrett said.