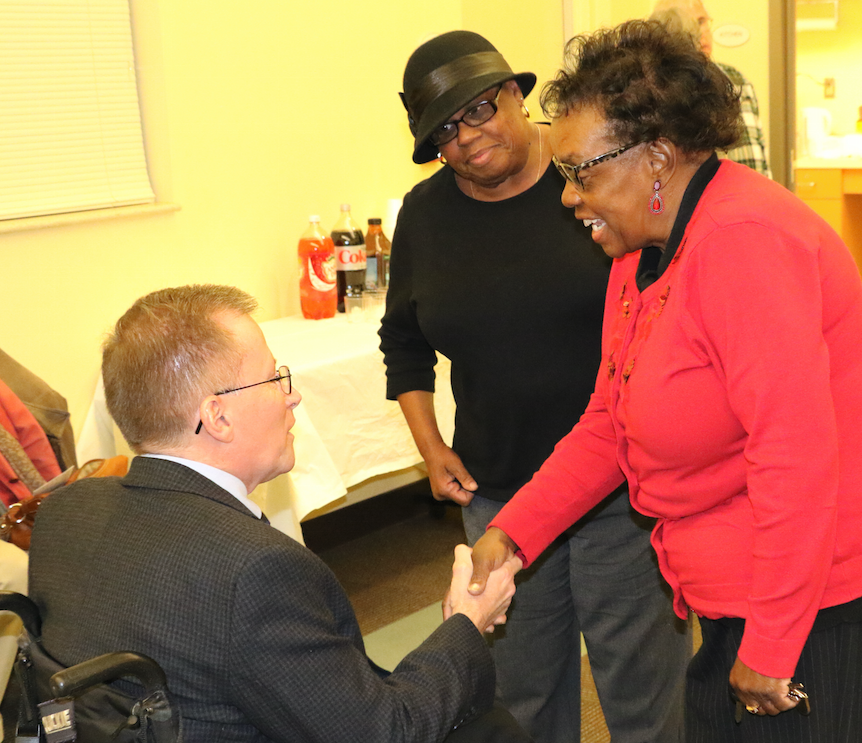 The Prince Edward community was given a special opportunity Feb. 16 to meet and greet the new director of the Central Virginia Regional Library (CVRL) system at Farmville-Prince Edward Community Library.

Rick Ewing, who began his directorial duties Feb. 6, noted that as the face of the library, he needs to be here, and he used a sports metaphor to describe Thursday’s event.

“To me, it’s a kickoff here, and the game’s ahead of me,” he said, after noting the game is the work of getting to know the community.

The event afforded him a good start to that work, with a group of more than 50 people coming to the gathering, which was hosted by the Friends of the Library in Buckingham County and Prince Edward County.

“We had people here from the board of the supervisors of Prince Edward and former staff and board members of the library and just citizens just coming in to say ‘Hi,’ and I’ve enjoyed so much a warm welcome and support in the community,” Ewing said. “I’m a lucky guy.”

He comes into his current position after serving as Buckingham branch manager for a little more than a year.

CVRL Board President Linda Paige, who formally introduced Ewing to Thursday’s crowd, said he has established a good relationship with the board of supervisors in Buckingham and now is getting to meet supervisors in Prince Edward.

“They’re pleased with what they’ve heard about him and what they’ve seen and his down-to-earthness, and I think there was at least four or five board of supervisor members here (tonight),” Paige said. “And that’s exciting.”

Also among those present was Peggy Epperson, the previous CVRL director who retired in September 2016. With her experience in Ewing’s role, she noted the meet and greet was quite important.